Choosing between two really good options is difficult. Many people describe that situation as a “good problem to have”.

This week, I came across one of those “good problems”.

Here were my options:

Here’s a story about how I threw both of these options in the trash and created a third option that far exceeds both.

This house is an up/down duplex less than a 5-minute walk from the train station to NY Penn.

Both units are currently occupied with performing tenants with leases that expire on 1/31/22.

We decided the best way to extract value from this home was to convert it from an up/down duplex to a single-family home.

Before walking the property with our architect, we thought we were confined to the existing footprint, which makes for a ~2,300 square foot home.

After running the comparable sales, we determined our After Repair Value (ARV) would be 1.15M because similar homes were trading for $500 per square foot.

When I presented this project to my mentor, he assured me the renovation would not exceed $400K, including most of the carrying costs. $175 per foot for a full-gut job made sense, despite the recent rise in cost of materials.

So here’s what the numbers looked like with the current assumptions:

It’s a thin deal when you start factoring in costs associated with the purchase and sale, contingencies, delays, etc.

Making ~$100K on $1M invested is not a great annual return for the risk taken.

Because the project was thin, our immediate plan was to sell this fix-and-flip to another investor who might have a lower cost of capital or a competitive advantage with the build.

Luckily, my partner found someone willing to take the house for $600K sight unseen. Let’s refer to this buyer as AJ.

AJ is eager. He’s calling us every single day begging for us to send him a contract.

We managed to keep him at a distance. We wanted to at least get out of Attorney Review before signing the property over to him.

Once we were out of Attorney Review, we began our due diligence. We only had two contingencies in our offer:

My first call was to an architect. During our initial walkthrough, we spent almost all of our time in the basement. The architect was able to point out a handful of structural issues that warranted a second visit with a structural engineer.

Before we left the property, the architect suggested tearing down the house and building something brand new.

He believed the town would favor a developer willing to convert a duplex into a single-family home. He also believed the lot would support a home closer to ~3,000 square feet (including an attached ~300 square-foot one-car garage).

This was unexpected. The cost of tearing down and building new would far exceed the $400K we projected earlier. It would be closer to $650K including carrying costs.

I feared the recently sold comps would not support a project this expensive.

As soon as I got back home I went back to the drawing board and I found my golden goose.

This project just got even more lucrative.

A Fork In The Road

This deal just got some more meat on the bone.

Now we’re looking at the following:

That’s a FAT spread. We could make every mistake in the book and still stand to make a hefty profit if we kept this deal for ourselves.

Which made us think: was tearing down and building new AJ’s plan all along? Did he know something we didn’t know? Probably!

We faced a decision:

I polled my IG-fam and the results were as expected: inconclusive!

Gun To Your Head?

Despite being a “good problem” to have, deciding between two good options can feel like having a gun to your head.

“What are your choices when someone puts a gun to your head? ... You take the gun, or you pull out a bigger one. Or, you call their bluff. Or, you do any one of a hundred and forty-six other things”

(If you get the reference… we just became better friends)

Instead of deciding between options A and B, I started looking for option C.

I was afraid to take on the new construction project. However, I felt like we were leaving a lot of money on the table if we only sold it for $600K.

Option C meant looking for another buyer to pay more than $600K.

Got My Sherlock Holmes On

I looked up the New Jersey Assessment Record for the house that sold for $1.545M using this website.

All you have to do is select the County, Town, and plug in an address and you’ll get all the pertinent data for a house including the names of prior owners.

Once I found the name of the prior owner, which we’ll call “123 LLC”, I went to Google. There were 2 different companies with a variation of the name “123 LLC” in NJ. I emailed them but neither took credit for completing that project.

Then I went to the Office of the Morris County Clerk website. I looked up all the public records for that address. I found the Deed Transfer from the sale. The Deed had the address of “123 LLC”.

I went back to Google and searched “XYZ Address” + “123 LLC” and one of the search results had a phone number. The phone number was different than the two companies I emailed earlier. This could be it.

Less than 5 seconds passed between the moment I found the phone number and the dial tone ringing in my ear. I was possessed. Creating Option C became my only focus.

Plus, I was running late to pick up Luna from school so I threw my Airpods in and ran out the door.

The phone didn’t ring long before a man answered on the other side.

“Wow, I found you! Great! I’m calling because I am under contract to buy a house that’s next to the project you finished not too long ago in Chatham, NJ. If you have some time, I’d love to discuss some things with you.”

“Sure! But first, you have to tell me how you found me. I try to keep to myself.”

I told him how I found him and he was impressed by my resourcefulness. If anything, he respected the hustle and opened up even more.

Being honest about how I found him could have gone either way. Another person might feel violated for invading their privacy.

I tried to ask as many questions as I could in the 15-minute drive between home and Luna’s school.

I pulled into the parking lot at Luna’s school before I realized I was rambling and running out of time. Dia would kill me if she found out I kept Luna waiting.

I asked what I thought would be my final question: “Are you interested in taking this project off my hands?”

I wasn’t clear enough. He replied with “Sorry, I don’t build for others. I only do my own stuff.”

“I understand. But I was asking a different question. I meant to ask what if I sold this property to you right after I buy it? Then you go ahead and just do what you did across the street again.”

“Interesting. Well, how much are you looking to get for it?”

Sidebar: I prefer not to give the first number in a negotiation. I don’t know where or how I picked up this tactic, but I try to avoid it at all costs. So I retreated.

“Well, I’d have to discuss it with my partners, but I know they’re excited to do this deal. If I present them with this idea, it would be best if I came with an offer in hand from an interested buyer.”

He replied with “Well, why don’t you just talk to your partners and let me know what they’d be willing to accept”.

OK, this guy knows what’s up. I’m getting excited by this volley, but I’m also running out of time. I’m at the front door of Luna’s school.

“Well, I know you bought the property across the street for $600K 2 years ago and the market is undeniably hotter right now. I’ll concede and say the cost to build is higher today than it was last year so that’s definitely something I can’t ignore. Can you see yourself paying $660K?”

“Great. I just pulled into my daughter’s school so I have to go grab her. Let me talk to my partners and I’ll get back to you later tonight or tomorrow. Sound good?”

“Sounds good, nice speaking with you”.

Things I did well:

Things I could improve on:

Going into a negotiation with a BATNA (Best Alternative to Negotiated Agreement) allows you to play the game more aggressively. If you screw up the deal, it’s ok because you have a backup option.

Giving the first number was a direct result of my time limit. I was not willing to get off the phone without making my proposal. If I opted to call him back later, I would have had to rebuild all that ground I gained.

When I realized he was a worthy competitor, I cut to the chase. We could have beat around the “who will crack and give the first number” bush for a few more volley’s before it got painfully awkward.

I decided to go first and shot as high as I felt reasonable. 10% more than he paid for the other property seemed to be the right number. I will never know if he was willing to pay more.

But that’s ok. Because Option C is better than Option A and B.

Harvey Specter would be proud (BTW, this is the reference from the quote above). 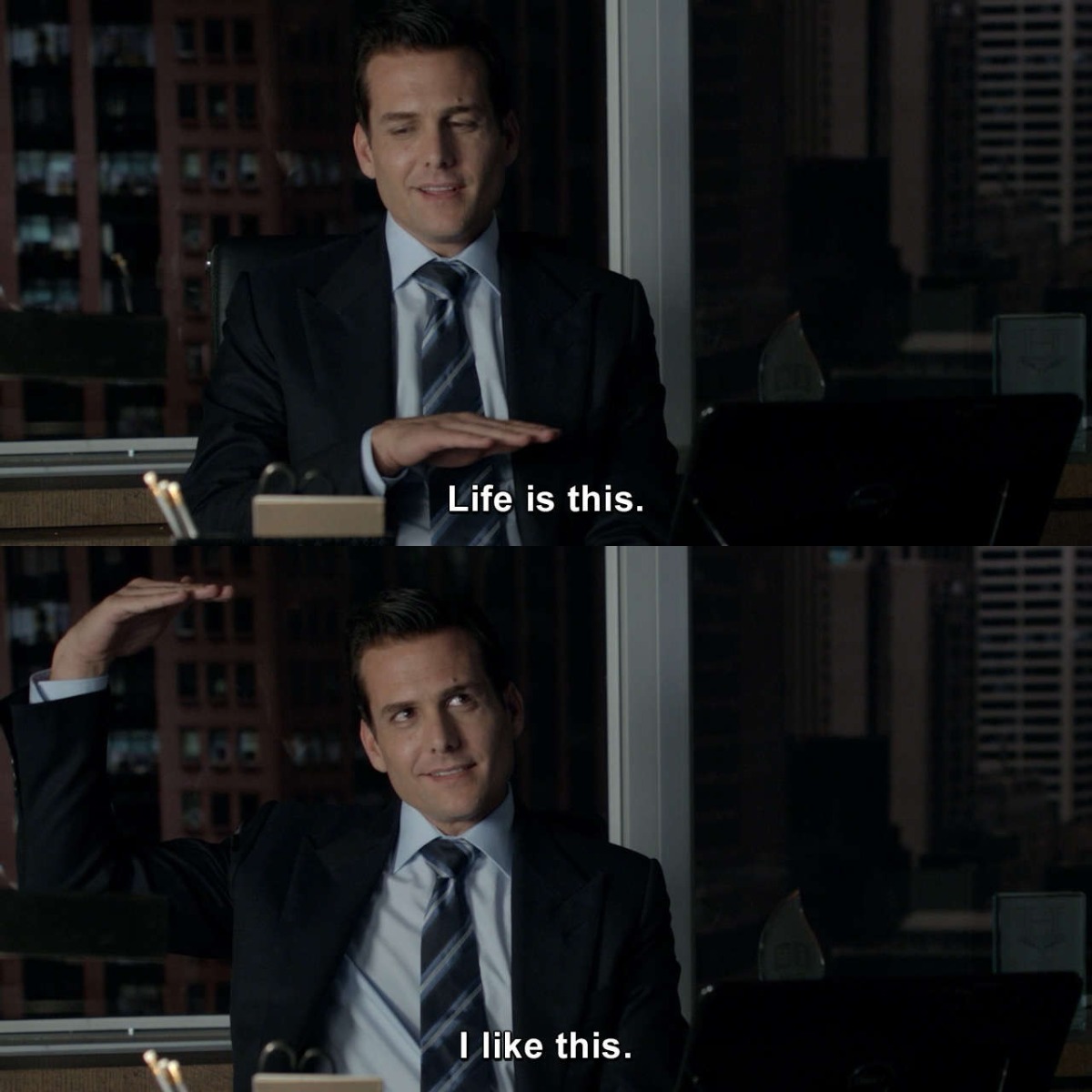