I’m finally getting around to writing the summary of my first Private Lending Deal. In a perfect world, I would have started this post around the time the deal hit my desk, and updated it along the way. That obviously didn't happen. Let's see how well my memory serves me.

▶Starting at the Beginning:

This deal started with a phone call from one of my dad’s employees, Pragnesh (AKA Prag). If you know him, you know him. If not, you're missing out.

Background: Prag is the older brother I never had. Our relationship is a little funny because he started working for my dad in 2000, when he was 20 and I was 12. Back then, I remember wondering if I should call him “Uncle”. But now, we poke fun at each other like brothers. Calling him “Uncle” would be detrimental to our dynamic.

Prag’s always been an advocate for me to invest in real estate. He took notice of how much I was studying the craft. I always had a real estate book with me, and I always listened to podcasts on the topic. I loved sharing what I learned with him. We spent our "lunch breaks" looking at houses together on Zillow. We would brainstorm what kind of work and money it would take to turn around a property profitably.

Prag attends a weekly dinner with people from our temple. I say "our temple" as if I was a regular attendee. I'm not. But the one or two times per year I need a direct line to a higher being, you can catch me at "our temple". Back to the story. At one of the weekly gatherings, Prag's friend announced he was trying to buy a specific house in the town we all lived in. But he needed help. Prag called me the very next morning to connect me with this guy. 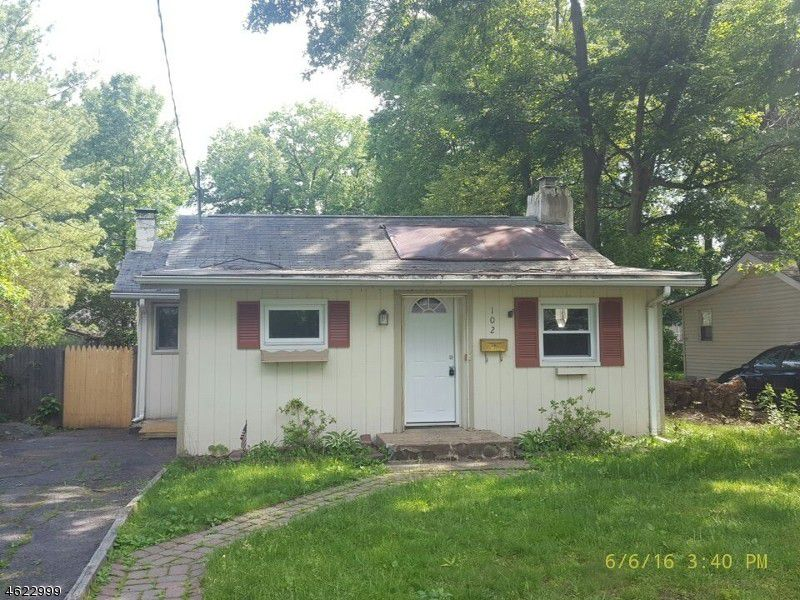 The house, in its’ current glory, was borderline uninhabitable. A gaping hole in the roof covered by a tarp was the tip of the iceberg. Banks wouldn’t lend on it. It had to be an all-cash offer.

The purchase price was $125K, and the guy who wanted to acquire it could only afford to put up $25K. He was looking for a private lender to front $100K to acquire the property at 8% simple interest.

Excited by this proposal, I immediately started to do my homework. Here’s what I came up with: 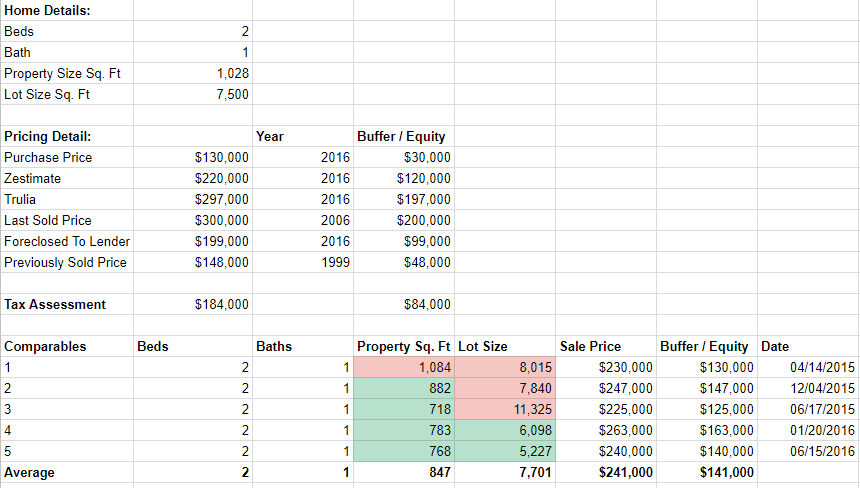 There was a large safety net built into this deal. The comps justified an average value of $240K. Which was ~110K over acquisition price and $140K over what I’d have in the deal ($100K). I was feeling nervous, excited, and cautiously confident all at the same time.

After I rounded up the data above, I called the borrower to see if we can meet at his home the same day. I got to his house and (first, took off my shoes like a good Indian) he introduced me to his wife and kids. After some niceties we went down to the basement, where his home office was set up. Less creepy than it sounds.

We sat down and he asked me what I thought of the deal. I pulled up my spreadsheet and said this is a solid opportunity for both of us. After some back and forth, we came to terms: 12 months at 10% interest. We spent the rest of the hour talking about how we came to fall in love with real estate.

I just realized we got down to business first. Then tried to get to know each other better. Interesting.

The borrower's plans for the property surprised me. He needed my money just to buy the house and let it sit. The deal was too good for him to pass up. He had it under contract for weeks at that point, but didn't have the money himself to close the deal.

This was his dream scenario: after he acquired the property, he wanted to knock it down and build a 3,000 sq. ft. home for his family. I was surprised to learn this because honestly, this was a perfect opportunity for a quick fix and flip in a growing area. But, he wasn’t interested in making money on this deal. He saw more value in building a new home for his personal use.

I love this model. I look forward to stealing it when I’m ready to stop renting and buy (which may be never, but that’s a whole other post).

?Back to the Economics of the Deal:

At this point you might be thinking, “Sun, how the hell do you have 100K to throw around on real estate deals”?  To which I'm proud to say, I didn’t. But again, the deal was too good for me to pass up.

One of the best things about real estate is money is hardly ever the issue, although most people tend to think it is. If you have a great deal lined up, you can always find the money to execute it. I knew this principle going into the deal. So I had no problem agreeing to fund him and figuring out the rest after the fact.

Here’s how I ended up financing the $100K. First, Dia and I had a little more than $20K in our liquid savings account ready to go. A good start, but not even halfway there.

Then, I sent a mass-text to the college friends group chat: “Yo, gotta deal that’ll yield 10% for one year. Safe bet. LMK if interested”. Got another $20K from that one message.

Finally, after some failed attempts here and there, I went to “BOMAD” - Bank of Mom and Dad for the final $60K. They asked two questions before writing the check: “When are you having kids?” & “Did you eat anything today?”

In all seriousness, my parents and a good friend were entrusting me with a lot of money. They didn’t super scrutinize my research. However, I made sure to show them the numbers and field any questions. The number one question happened to be, “What’s the worst case scenario?”. I tried to come up with a few different scenarios. Here’s what I came up with: 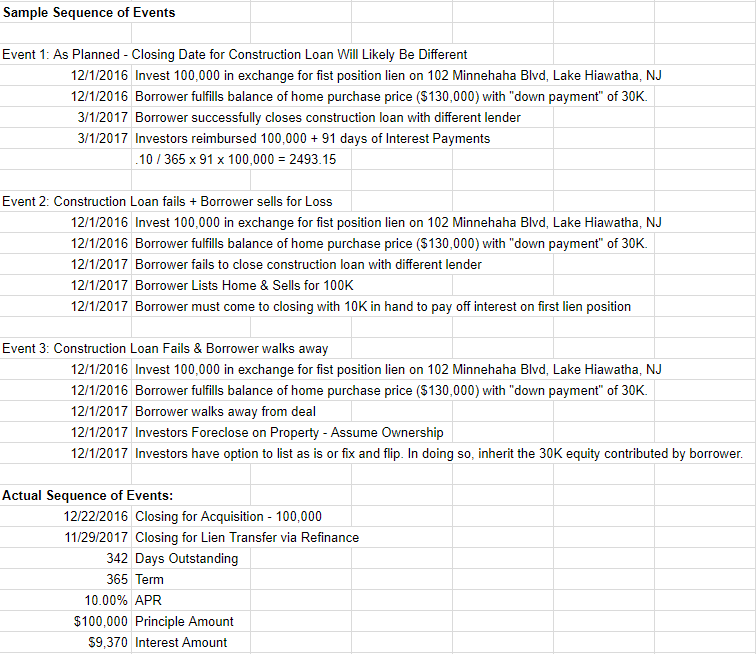 So everything up until now sounds fine and dandy. And yes, this deal was pretty much went off without a hitch. I couldn’t have asked for a better first deal. However, there was one recurring stressful moment. In hindsight, my worries were not valid. But, I do remember feeling annoyed, and even angry a couple of times during the term of the note. All because the expectations were set too high.

When the borrower was telling me about his plan, he assured me my money would be “refinanced out in 6 months MAXIMUM”. In hindsight, I should have made the term 6 months instead of 12, using his words against him.

To my dismay, the 6 month mark came and went. I asked how things were going over text and he pushed to "oneor two more months, MAXIMUM". At the same time, he invited me over to see how far he got with his plans.

Within a few minutes of arriving to his home, he showed me the blueprints he had mocked up for his new home. It looked beautiful. He told me the plans for the house was a few hundred square feet over the allowable floor plan for the lot size. He didn’t want to change the plan for his dream home, so he took a risk (in time) and requested a variance from the town. This is what caused the delay. I respected his stubbornness.

I left that day feeling like my money (and my friend’s / parents’ money) was still safe. Then the 7 - 8 month mark came and went. Ugh. Another interaction via text pushed the expectation to month 9. At this point he was accepting bids from builders. I sent him a few referrals, none of which panned out.

In the beginning of this post, I shared how confident I was in this deal. I remember telling my investors (college buddy and my parents), we’ll be better off if the borrower doesn’t perform. We’ll foreclose on the property and make way more than 10% interest. So why was I so stressed / worried / annoyed when he kept pushing the timeline?

First, I hate being on the receiving end of unmet expectations. I keep my word. Pretty much all the time. I expect others to do the same. Which is a major issue for me because I’m well aware one of the keys to happiness is to have zero expectations. If you have zero expectations, all the bad stuff is baseline. All the good stuff, no matter how nominal, is upside. One stoic principal I like to remind myself of is: Be strict with yourself, & forgiving of others.

Second, I’m a path of least resistance kind of guy. Even though I stand to make more money if the borrower defaults, I don’t want the headache of foreclosure, funding the flip, finding a general contractor, waiting for it to sell, etc., etc.

That’s why I’m partial to private lending. It doesn’t come with the headache of tenants, contractors, banks, etc.

This deal was a huge success. I couldn’t be happier about finally putting my first deal behind me. Helping a friend cease an opportunity to build his dream home is the cherry on top.

I'd love to hear your take! Let me know how I did. Please leave a comment below with your thoughts or any questions you might have. Also, make sure to sign up for my newsletter. That will ensure you don't miss my next post!