I Sold My Tesla!

Back on April 1st, 2016, I stood in line for 2 hours at the Short Hills Mall to secure my reservation for the Tesla Model 3. My friend, Pankaj, and I even made the background cut on ABC news. I am cheesin’ so hard in this picture.
We were next in line.

It took 2 years, 4 months, and 10 days before I finally took delivery of the vehicle on August 10th, 2018. The wait had been well worth it. Picking it up from the showroom in Paramus, NJ was such a memorable moment for me. 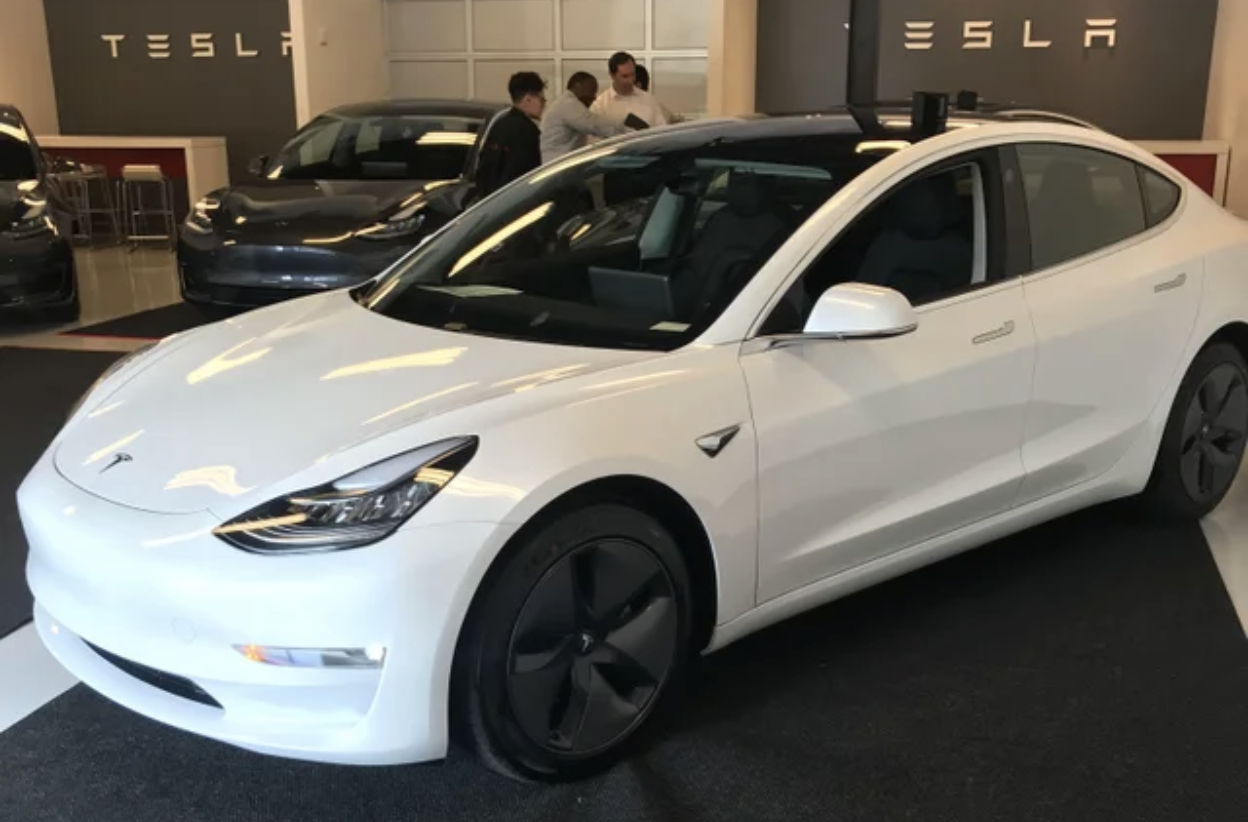 The Tesla Model 3 was everything I hoped for, and then some. It’s insanely fast. It drives itself. It’s designed like a spaceship.

Well, I didn’t mean to. It kind of just happened…

Let me explain: I spend quite a bit of time on Reddit. One of the subreddits I subscribe to is /r/TeslaMotors. On Thursday, February 22nd, 2020, I found myself in a thread titled, “Used Model 3 Market”:

Someone was asking the /r/TeslaMotors community if they anticipated the market for Used Model 3’s to be flooded with supply once the new Model Y hits the market. He was specifically wondering if the price of used Model 3’s would go down in the near future.

You can read the entire thread yourself here, but the overall sentiment from the community was prices won’t drop dramatically, at least not immediately.

Then I had to go and open my big mouth… “Want to make an offer on my Model 3?” 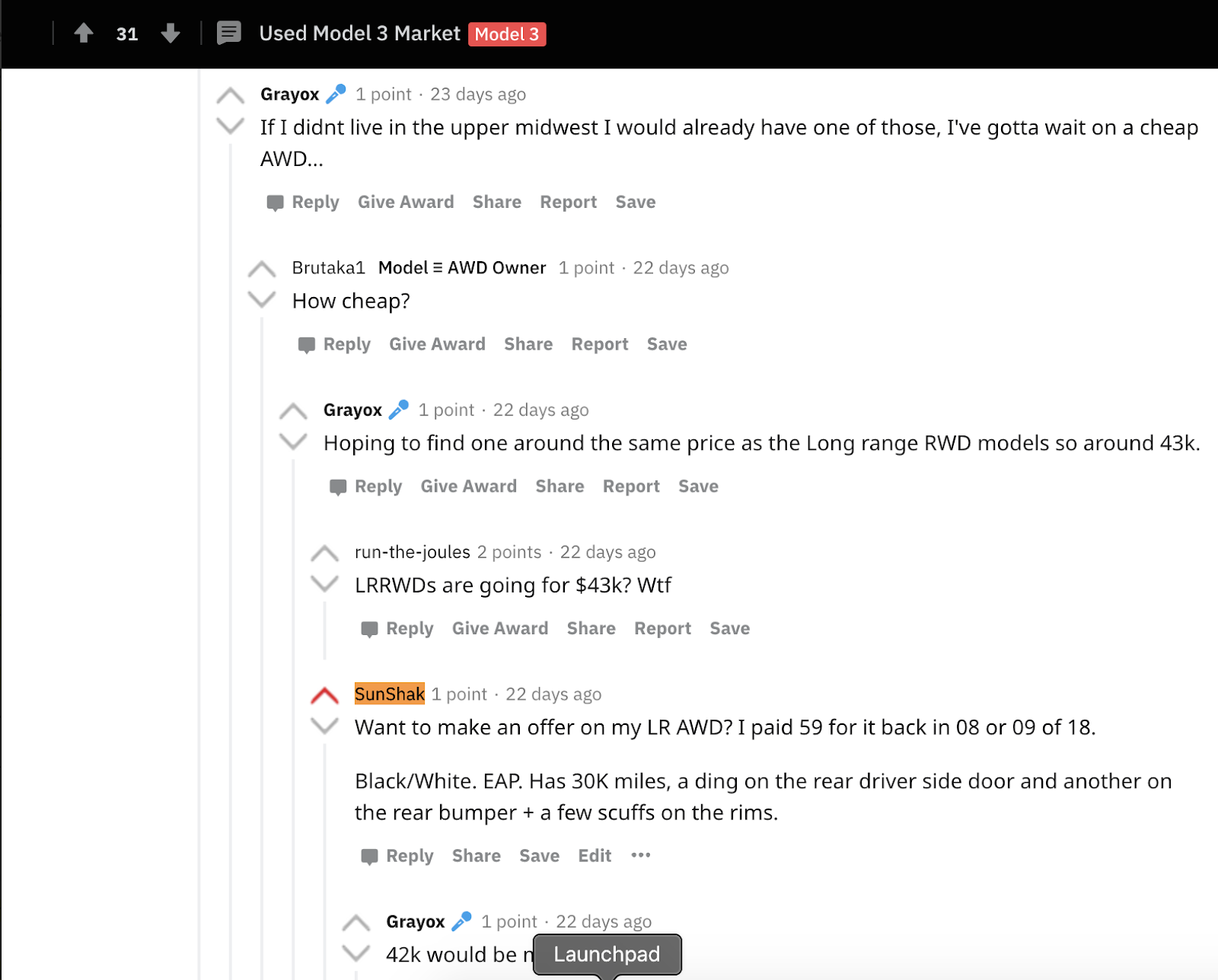 We continued our conversation in Reddit’s Direct Message.

I countered at $45K and asked him to close quickly. His original offer of $42K was completely acceptable. However, I couldn’t immediately agree. If he feels like he’s leaving value on the table, I risk him rescinding his offer.

He says they can’t do $45K, and he’s likely going to buy a new one once he can afford it. He’s playing hardball. I love it.

I admit I was trying to squeeze him and will do $42K. 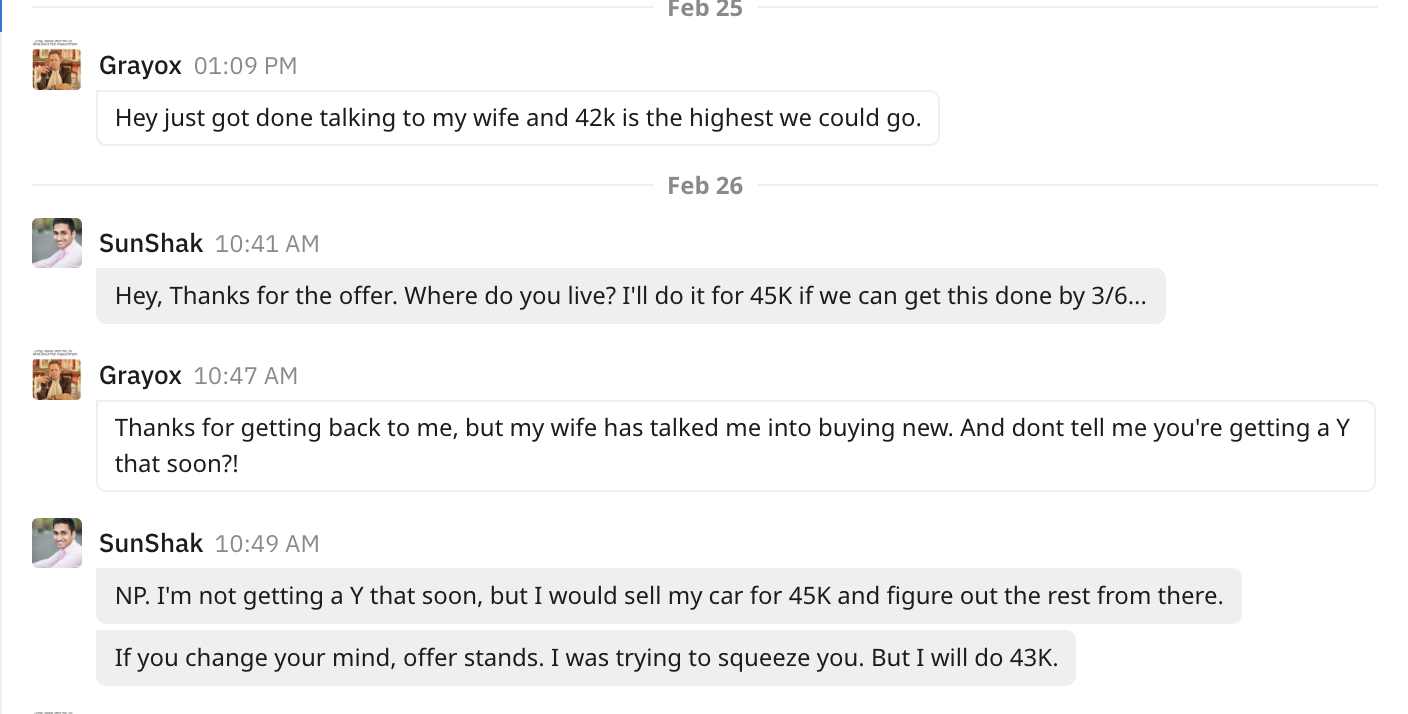 As we’re building rapport, I discover the potential buyer is from Des Moines, Iowa and he’s married.

I started to paint a picture of him driving the car home from NJ. I even let him know the one-way flight cost to Newark.

He’s reengaged and starts asking for pictures of the car. I send them immediately.

After I sent the pictures, we began to discuss the condition of the car. Mechanically, it’s perfect. It drives like a dream. However, there’s a ding on the rear passenger door, the rear bumper, and a few curb rashes on the rims.

I mentioned the cosmetic condition before we ever started negotiating. Being transparent about imperfections up front establishes goodwill in any situation. But it wasn’t nearly enough.

I needed to address the elephant in the room: Trust.

Buying an expensive car from a stranger on the internet is kind of crazy when it’s not administered by a credible third party service like Ebay, Autotrader, or Carvana. I needed to establish credibility.

I directed him to a Reddit Post I wrote back when I was looking at financing options for my car. It was well received by the /r/Teslamotors community. Someone even awarded me Reddit Gold! 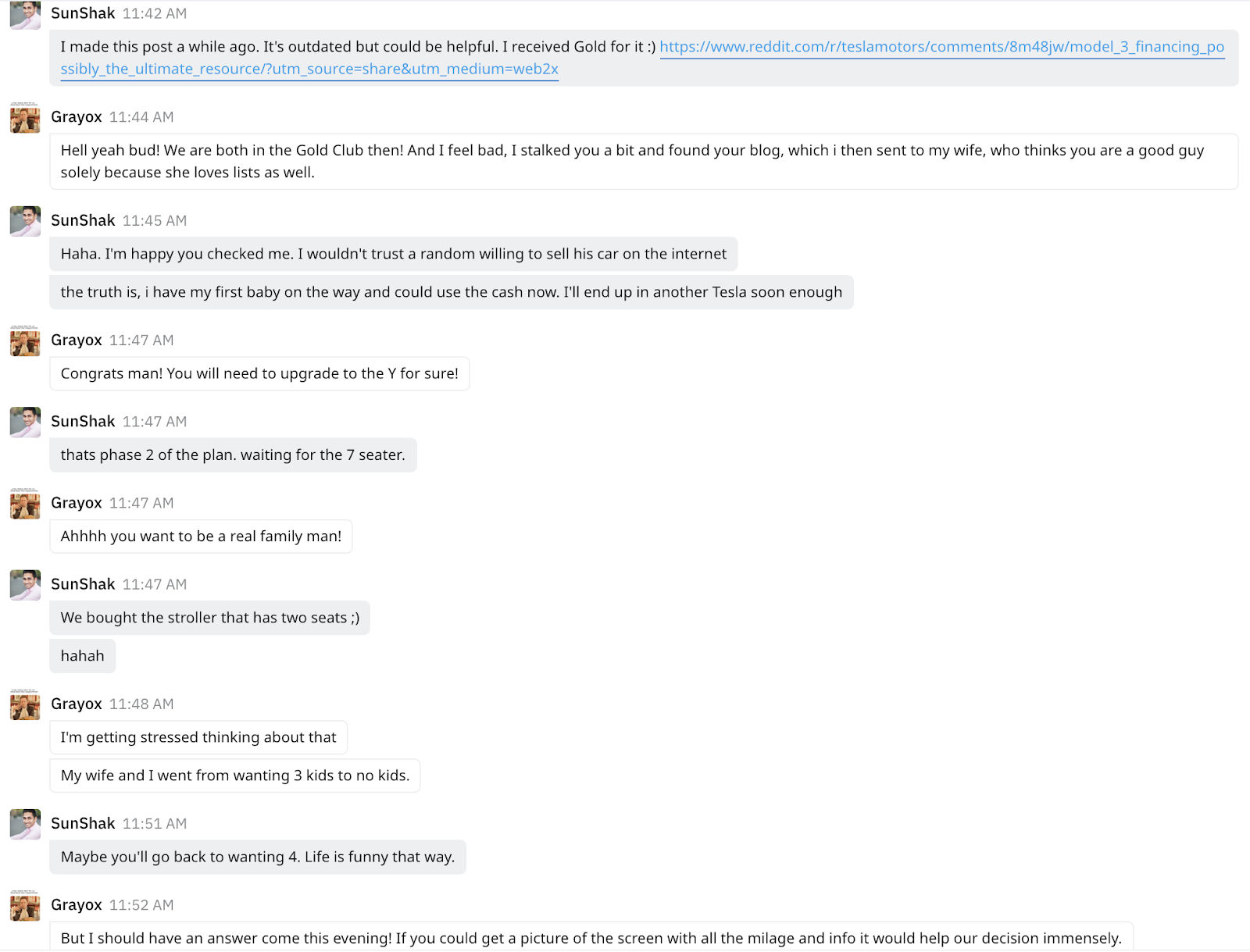 After discussing with his wife, the buyer says he’d be better off buying new again. It was hard to argue. The price of a brand new Long Range All Wheel Drive Tesla Model 3 has since reduced to $48,990. He’d only need to pay $6,990 more to get a new version of the same car.

He accepted the next morning!

Conducting a private party vehicle sale without the help of a third party intermediary is ridiculously difficult and nerve wracking. You can’t help but think you’re being scammed the entire time.

After reading through our DM’s, the buyer’s wife made the following meme: The buyer and I trusted each other, but we kept hitting walls that prevented us from moving forward after we both verbally agreed to the purchase and sale of the car.

Part of my offer was purchasing flights for the buyer and his wife. I have a lot of reward points so this was a non-factor for me. At the same time, I didn’t want to be wasteful so I asked the buyer to send me $250 via PayPal immediately after I purchased the flights. That way, if they decided not to show, I would at least recover the cash value of points used to purchase the flights.

The buyer and his wife could only come on the weekend to pick up the car. The original plan was to exchange the Title for a Cashier’s Check in the amount of the purchase price. Then I voiced my concerns about his Cashier’s Check potentially being fake, and I wouldn’t know it until Monday because banks aren’t open on weekends.

I requested he wire the money the Friday before he arrived. He was obviously concerned I wouldn’t show up at the airport to pick him up once I got the money. A completely valid point.

We finally agreed one of us needed to take a leap of faith. We decided it should be him since his flight was booked and he would be in New Jersey anyway. If I screwed him over, it would be more convenient for him to knock on my door than if he screwed me. I’d have to chase him back to Iowa.

He wanted access to the vehicle via the Tesla App before sending the funds via wire transfer. I agreed. If he didn’t send the funds, it would be easy enough to remove him. He also didn’t have access to do much besides locate the car (he already has my address), start it, lock it, or unlock it. 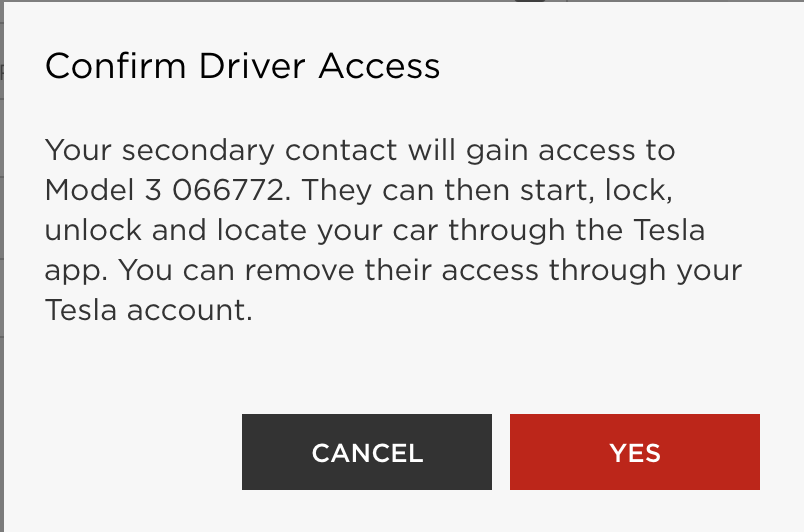 He needed to organize financing, an insurance policy, ownership transfer by Tesla, etc. Each one of these obstacles was an opportunity for him to back out of the deal if he didn’t want to make an effort. Luckily, the buyer was persistent and undeterrable.

?Who Won? The Numbers

I believe both of us won.

I don’t know what the buyer’s side of the equation looks like. However, for him to agree, it’s safe to assume he is happy with the terms of the deal.

*I’m not factoring in the cost for the flights because I used points.*

Tesla Tax Credit: When I bought the car back in 2018, there was a $7,500 Federal Tax Credit Incentive when purchasing a Tesla. This incentive no longer exists.

*Damn I drove a lot. 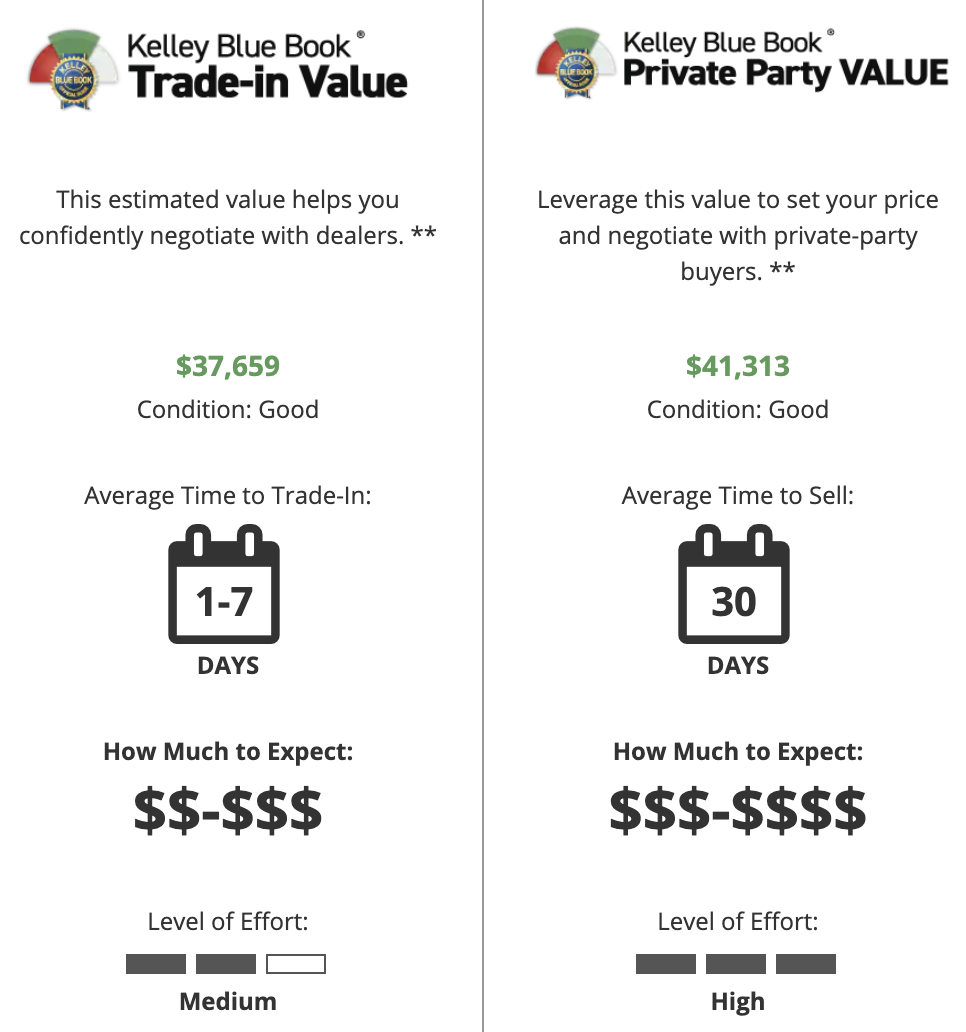 I can’t believe I sold my Tesla. If I’m being honest, that car symbolized a lot for me. That pearl white, fully electric, self driving car was a tangible middle finger to my past failures. It was patience, persistence, hard work, and sacrifice personified.

But I don’t need a material thing to tell me how far I’ve come. I have my story. I have my experience. I have my witnesses.

A big part of why I offered my car for sale was just to see if I’d go through with it. Could I let go of my status symbol?

Of course I can. I made a habit of letting things go. I especially like to rid myself of items that start to approach the line of “things I can’t live without”.

I’ve said it before, and I’ll say it again. I can be stripped of everything, save a handful of people, and I’d be completely fine. The people I love are all I need to bounce back after hitting rock bottom. Without them, I’d be nothing.

Right now is an interesting time. As I write this, we’re about one week into the COVID-19 social distancing / quarantine thing. We’re also about 3 weeks away from the due date of our first child.

With Dia working from home right now and going on Maternity leave for the next few months, we’ll really only need one car between us. Dia’s car lease is up in August, so we have time to decide.

Once Dia starts going back to work, who knows, maybe I’ll end up getting that new Tesla Model Y. 😉

??A Few Pics From “Closing” 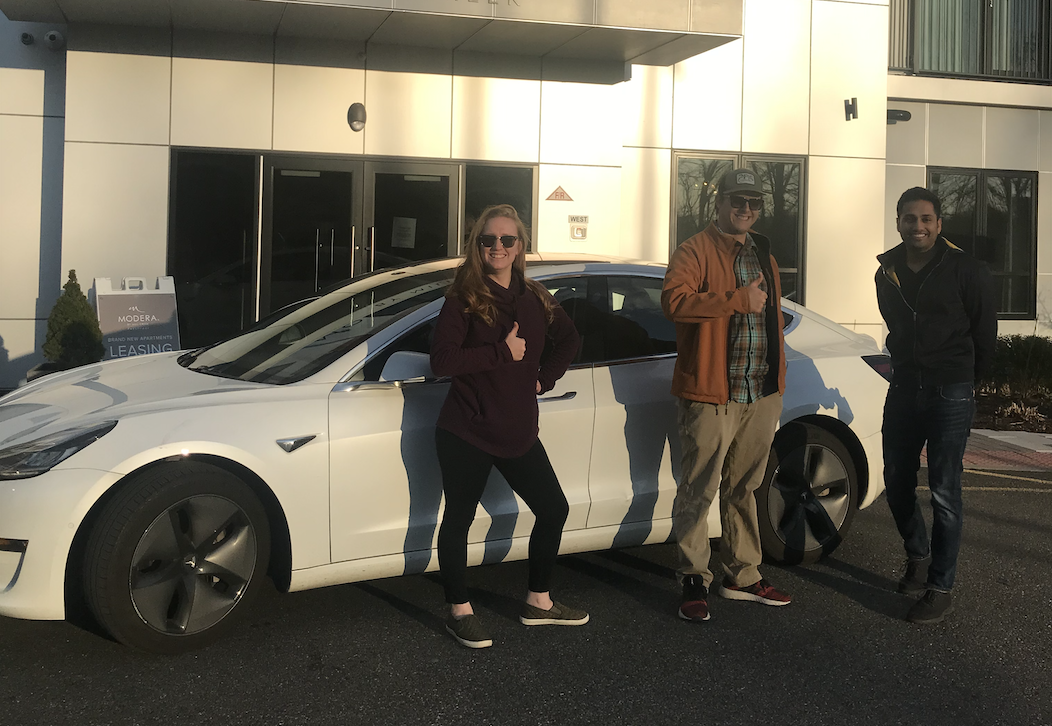 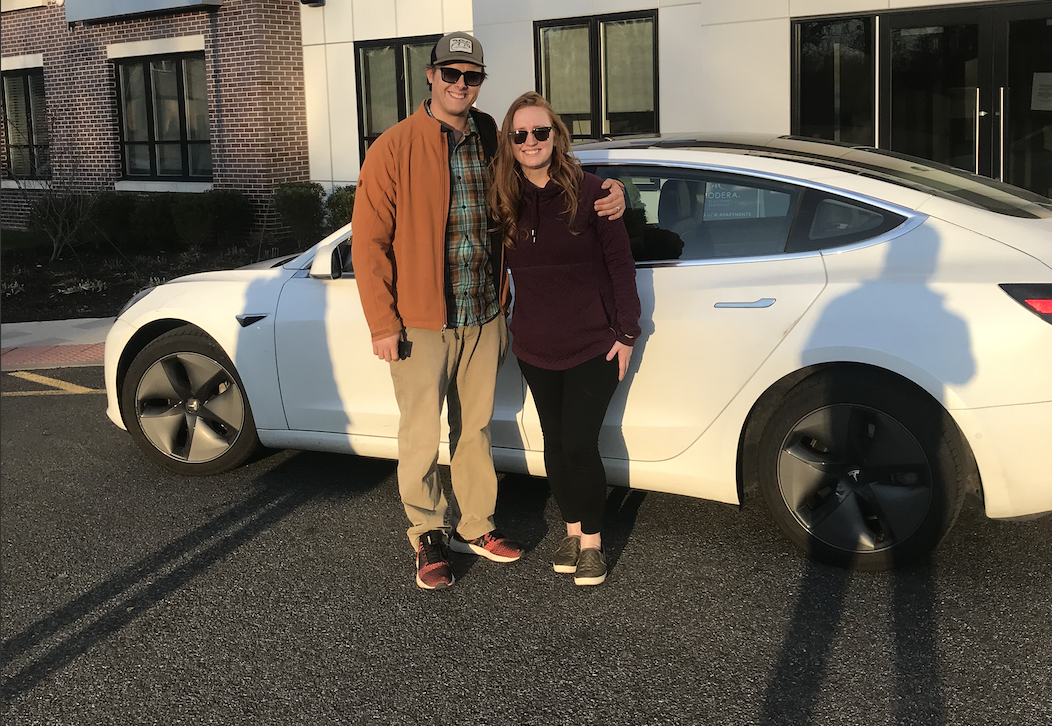 The Happy Couple & Their New Ride! 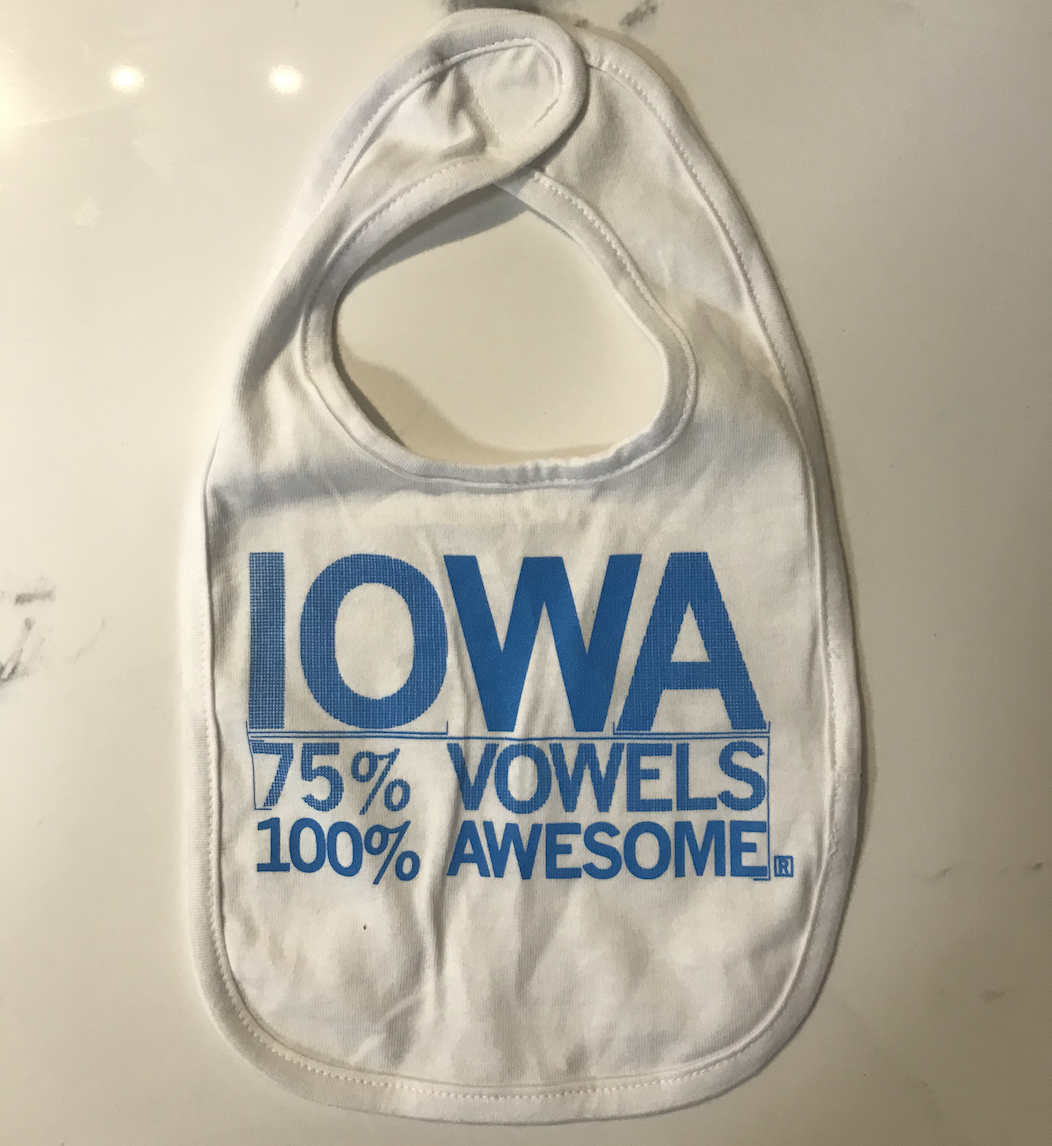 A Very Thoughtful Gift For BabyShak

We hope you guys enjoy your new ride.

Will definitely hit you up when we’re in Iowa. 🙂