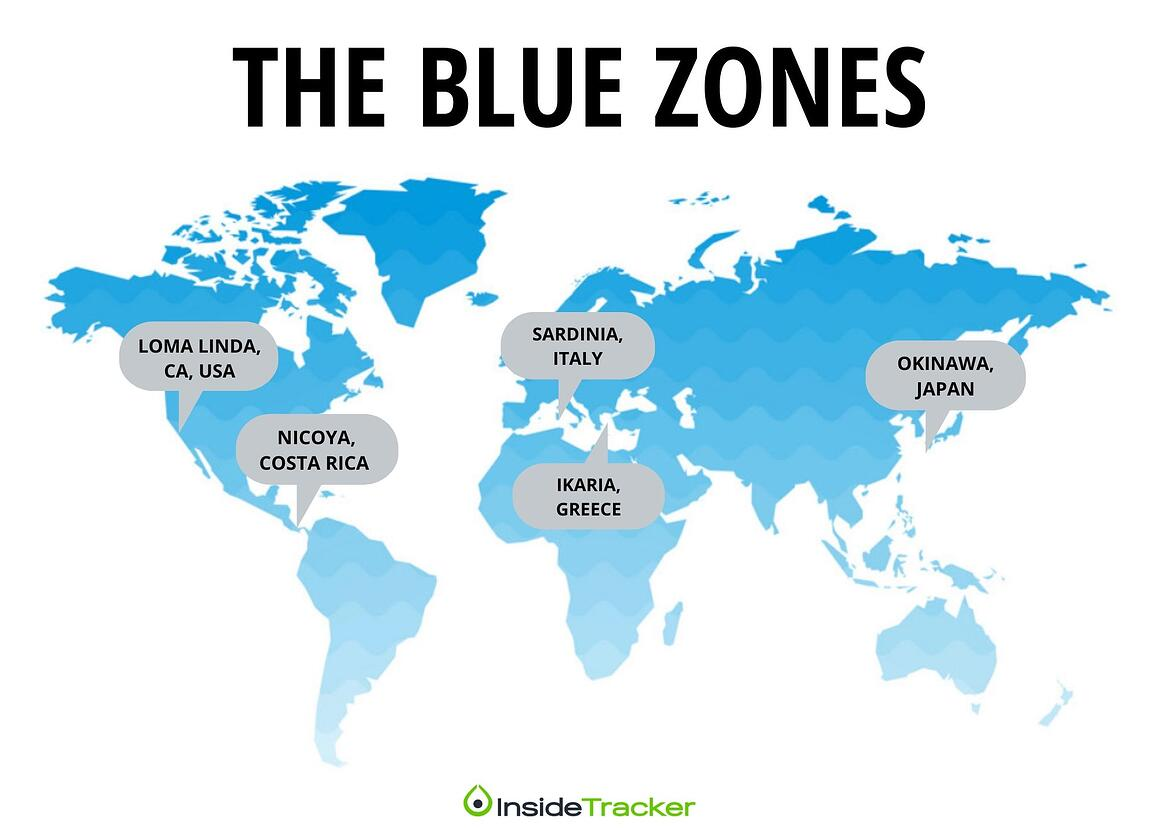 There are 5 Blue Zones in the world.

These 5 regions have the most centenarians per capita. A centenarian is someone who lives to be 100 years old.

Sardinia is home to the world’s longest-lived men. Many men work as shepherds and walk 5 miles per day. That’s 10,000 steps per day! FitBit coincidence?

Ikarians subscribe to a Mediterranean diet full of fruits and vegetables, whole grains, beans, potatoes, and olive oil. Like most of Europe, Ikarians also take a midafternoon break.

Okinawa is home to the longest-lived women. Okinawans attribute their longevity to an old Confucian mantra: Hara Hachi Bu, which reminds them to stop eating when 80% full. Furthermore, Okinawans have strong social circles. I’ll dive into this later.

Residents of Loma Linda, California recognize the Sabbath and downshit for 24 hours every week. This community stays active by continuing to work and exercise in old age.

Nicoyans spend roughly 15% of what Americans spend on healthcare, but are more than twice as likely as Americans to reach the age of 90. Their secret weapon is calcium- and magnesium-rich water, in addition to the fruits rich in antioxidants at their disposal.

I’m dead set, no pun intended, on living to a functional 100 years old. So as I was watching this episode I soaked in everything it had to say.

?Down To Earth TidBits

Zac and Darin visited a few homes where multiple people in the same household live to be 100+ years old, which supports the argument that longevity is environmental.

What are they eating? A little bit of meat (low-protein diet), lard, and a lot of produce they can grow in their backyard.

Zac says, “When I shot Baywatch, I didn’t eat a single carb for six months. I still can’t get over how this diet of carbs and low protein is the exact opposite of what any trainer has ever taught me.

Staying active doesn’t have to mean going to the gym. It could mean doing things the way they used to be done. Ride a bike or walk to where you’re going instead of driving.

Stay mentally engaged. After retirement, people become passive users of the television. A great way to fix this is living in a multi-generational home. Grandparents provide care for young children while parents are off at work.

There’s been a running joke in my family for decades now: “Ba is going to outlast all of us”

“Ba” is what we call my dad’s mom. She’s the only grandparent I’ve ever had. The other three passed away before I was born.

The reason we say Ba is going to outlast all of us is because of her Blue Zone compliant lifestyle. As I was digging deeper on Blue Zones, I learned about the Power 9.

The Danish Twin Study established that only about 20% of how long the average person lives is dictated by genetics, whereas the other 80% is dictated by lifestyle.

Dan Buettner assembled a team of medical researchers, anthropologists, demographers, and epidemiologists to search for evidence-based common denominators among all Blue Zone regions.

No need to hit the gym. Just do things the way they used to be done. Walk or cycle instead of drive. Practice gardening, move the earth. Carry heavy loads over long distances.

Have a reason to jump out of bed in the morning. It could be family, work, or some other higher responsibility.

Take a nap. Close your eyes, focus on your breath. Practice gratitude. Figure out a way to actively relieve stress at least once per day.

Stop at 80%. Whether it comes to consuming energy (eating) or spending energy (exercise), stop when you reach 80% capacity. Leave some in the tank.

Blue Zones rely heavily on a plant based diet. An average sized person may eat 15-30 grams of protein in a day, saving red meat only for special occasions or a weekend dinner with extended family and friends.

A glass of wine per day keeps the doctor away. Best enjoyed with friends and family at dinner. In case you’re wondering, 7 drinks on Saturday isn’t the same as 1 drink per day.

The research showed all but 5 of 263 centenarians interviewed belong to some faith-based community and attended faith-based services roughly 4 times per month.

Multi-generational homes are quite common in Blue Zones. Grandparents help raise the children while parents are off at work. Most centenarians are also married, as committing to a life partner can add a few years to life expectancy.

You are the average of the 5 people you spend the most time with. Research from the Framingham Studies shows that smoking, obesity, happiness, and even loneliness are contagious. Okinawans build something called moais, which are groups of 5 friends that are committed to each other for life.

My Ba belongs to two temples in Parsippany, NJ. She goes to the temple once per week, and she also spends hours reading scriptures and chanting prayers every single day. We’re positive Ba has a direct line to god.

After reading her scriptures in the morning, she moves naturally. Ba goes for a walk every single day, sometimes twice per day. If it’s warm and sunny, she’ll go outside. If it’s cold or rainy, she’ll do laps in the basement.

After her walk, she downshifts and takes a nap.

Once she is refreshed from her nap, she starts dialing. She has a tribe. If one friend doesn’t pick up, there is always another number to dial. No matter what, she gets her daily dose of gossip in.

Her diet is 99.9% Gujarati food. My mom makes her a fresh dish of daal (lentils), rice, vegetables, and roti every single night. Ba doesn’t eat meat, so her diet is definitely slanted towards plants.

Finally, I can’t forget to mention that my Ba came to America right around the time I was born. She invested a lot of time raising me. Some of my earliest memories are:

Watching Zac Efron and Darin Olien travel through Sardinia and learn about the environmental factors that help these people live longer was incredibly interesting.

However, I had the perfect example under my nose my entire life. My Ba was born in 1933 and shows no signs of slowing down. This year she will be 87 years old.