Disclaimer: None of what you’re about to read is investment advice. 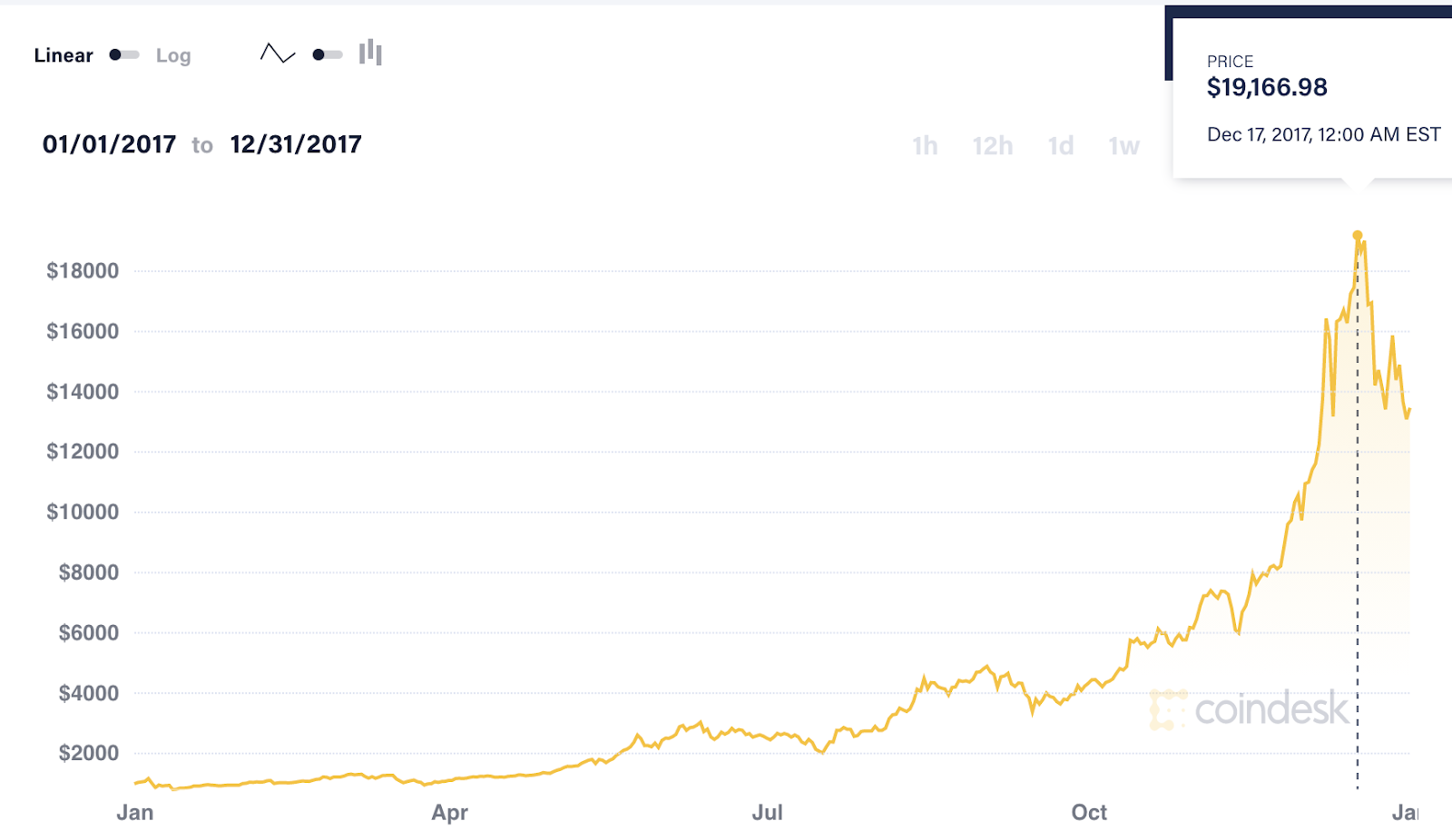 Bitcoin became the bell of the ball. So many of the podcasts I listen to, YouTube Channels I watch, and blogs I read pivoted their content strategy to include all things blockchain and cryptocurrency.

The seed was planted. The research began. Thankfully, I didn’t rush in.

?What Goes Up, Usually Comes Down

2018 wasn’t as fortuitous for BTC HODLers. 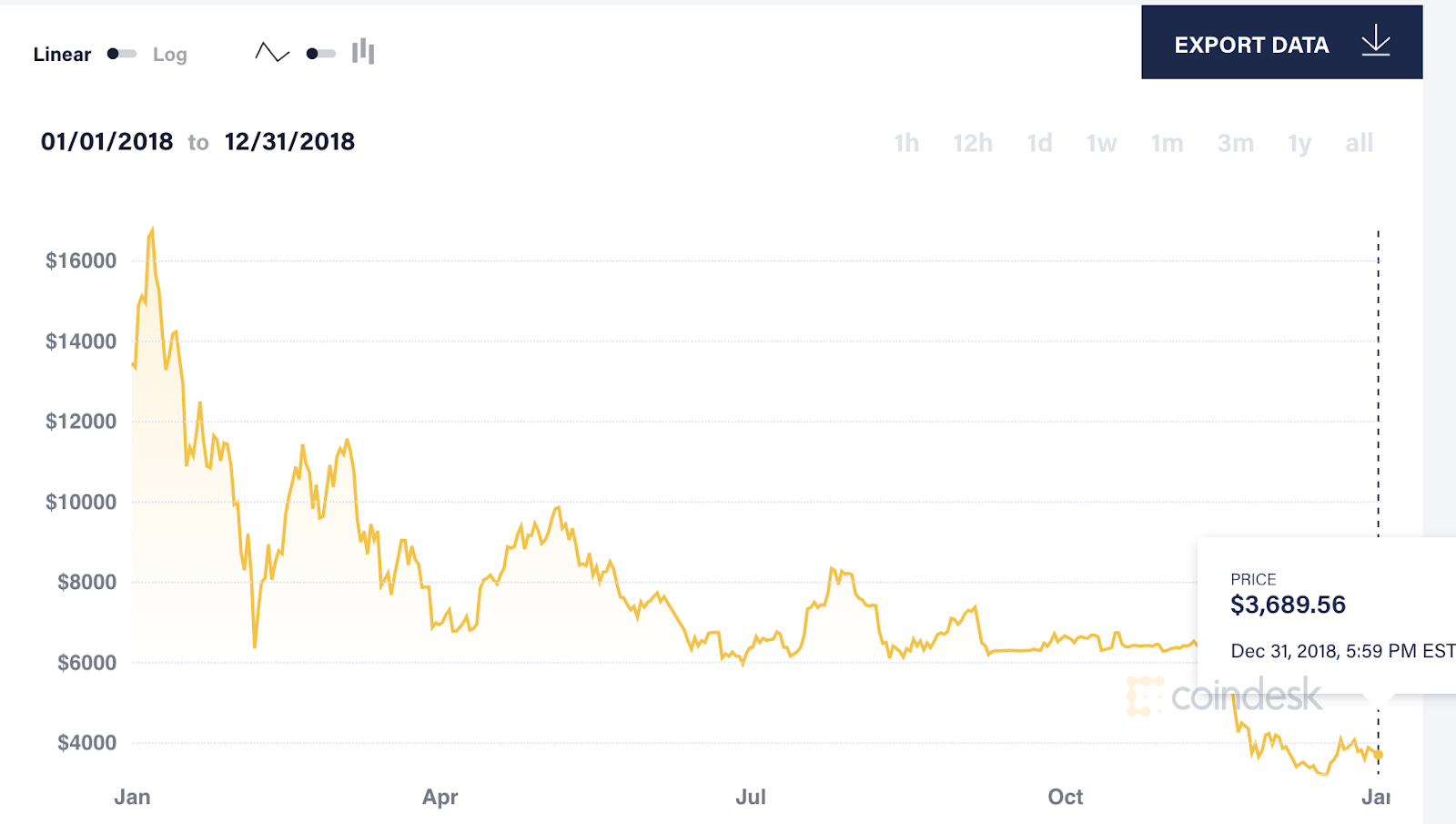 The sharp decline shook my confidence in this investment class (cryptocurrency). On top of that, one of the greatest investors of our time, Warren Buffet, went on record describing Bitcoin as “rat poison, squared” as he vowed to never own cryptocurrency.

Buffet’s concerns were and still are valid.

He considers Bitcoin an unproductive asset. “They don't reproduce. They can't mail you a check. They can't do anything. What you hope is that somebody else comes along and pays you more money for them later on”

Buffet doesn’t consider Bitcoin money because “It does not meet the test of a currency. It is not a durable means of exchange. It's not a store of value.”

Finally, Buffet admitted to not understanding Bitcoin. "I get in enough trouble with things I think I know something about. Why in the world should I take a long or short position in something I don't know anything about?”

?The TL;DR on Bitcoin

Trying to understand Bitcoin is a trip.

Here’s the Too Long; Didn’t Read.

Bitcoin was started by someone named Satoshi Nakamoto. You can read his White Paper from 2008 introducing the concept by clicking here.

Bitcoin is decentralized. Nobody controls Bitcoin. It runs on people’s computers all across the world.

It’s completely digital and has no physical presence. Bitcoins are just entries in a big ledger. Everyone on the network has a copy of the ledger and it’s called the blockchain.

Anonymity is one of the main benefits. People get and send bitcoins to addresses (just like email). They’re a bunch of random letters and numbers. A Bitcoin address (a.k.a public key) comes from a private key and they’re linked together using math. The private key is used to spend bitcoins.

Bitcoins come into existence through a process called mining.

There will only ever be 21 million bitcoins minted. There are roughly 18.6 million Bitcoins in circulation right now (March 2021). The remainder has yet to be mined. We can expect all 21 million to be mined sometime around the year 2140.

According to the cryptocurrency data firm, Chainalysis, around 20 percent appear to be in lost or otherwise stranded wallets.

Bitcoin is often referred to as “digital gold” despite having absolutely no relationship to gold at all. The two assets are not meaningfully correlated in any way. It’s simply a comparison market observers like to make to try to understand Bitcoin better.

The gold standard is a monetary system where a country's currency or paper money has a value directly linked to gold. For example, if the US set the price of gold at $100 per ounce, the value of one dollar would be 1/100th of an ounce of gold.

The gold standard is no longer used by any country. Britain stopped using it in 1931 and the US followed suit in 1933. What came next was a concept called Fiat Money, which is what we still use today.

Fiat Money is government-issued notes and coins that are not backed by a commodity like gold or silver, but instead by the confidence in the government that issued it.

With the physical quantity of gold (or any commodity) acting as a limit to currency issuance, a society can follow a simple rule to avoid the evils of inflation or deflation.

?“A Hedge Against Inflation.”

Investors often turn to gold as a hedge against inflation because it is a real, finite, physical asset that tends to hold its value for the most part.

If we fast forward a decade or two and monitor the behavior of future investors, do we imagine they’ll be seeking out physical gold to store under their mattresses or will they be buying “digital gold” to store on their computer devices?

My parents have gold coins. My kids will have bitcoins.

?Bitcoin is a Risk-On Asset.

Bitcoin is risky. Just look at the charts. The volatility alone is enough to scare most rational investors away. There are safer ways to invest your money.

Despite what your favorite meme account on IG says, Bitcoins value is more correlated to risk

Let’s quickly compare the market cap of Bitcoin to Gold as they stand currently and their “full potential”.

If all gold and bitcoin available came into existence at current prices, gold’s market cap is closer to 14x the size of Bitcoin (14.8 Trillion vs. 1.08 Trillion).

Does this mean Bitcoin has room to grow 12-14x its current value? No. Absolutely not.

Honestly, I don’t know what it means. I just wanted to compare their sizes. If I were a betting man, I’d say it’s only a matter of time until Bitcoin’s market cap meets or exceeds the market cap of gold.

Some experts believe Bitcoin is in the early majority phase, but I think it’s impossible to tell. Can we really analyze the adoption S-curve until it’s behind us? 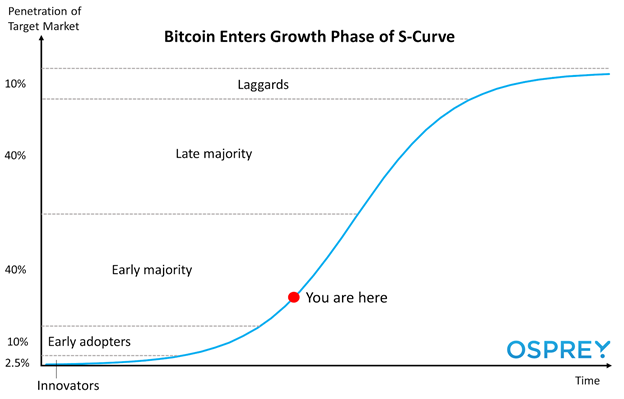 Bitcoin has been around since 2008. The first iPhone came out in 2007. So while Bitcoin may seem like an old technology, I feel like adoption is just getting started.

Here’s what we do know:

We’re seeing adoption happen in waves. We might be in the early majority phase for everyday retail investors, but we’re closer to the innovators’ phase for institutional-sized investors.

PayPal, Visa, and Mastercard are now accepting Bitcoin across their vast merchant networks. Brand name companies such as Microstrategy ($4B+) and Tesla ($1.5B+) are moving parts of their corporate treasuries into Bitcoin. Charities like the American Cancer Society are accepting Bitcoin donations.

As more and more institutional-sized investors jump into Bitcoin, it’ll leave less to go around for the rest of us.

According to this article from Coindesk, only 4 million Bitcoin are in constant circulation. That number is getting smaller each month because apparently, institutions are buying up more bitcoin per month than what’s being mined. The supply squeeze is likely what’s causing the price increase.

?Why I’m Getting In Now

It’s a combination of two things:

2017 was irrationally good. It caught my attention. 2018 was inexplicably bad. I spent some time trying to understand blockchain technology and cryptocurrency as an asset class. I sat on the sidelines for all of 2019 and 2020. 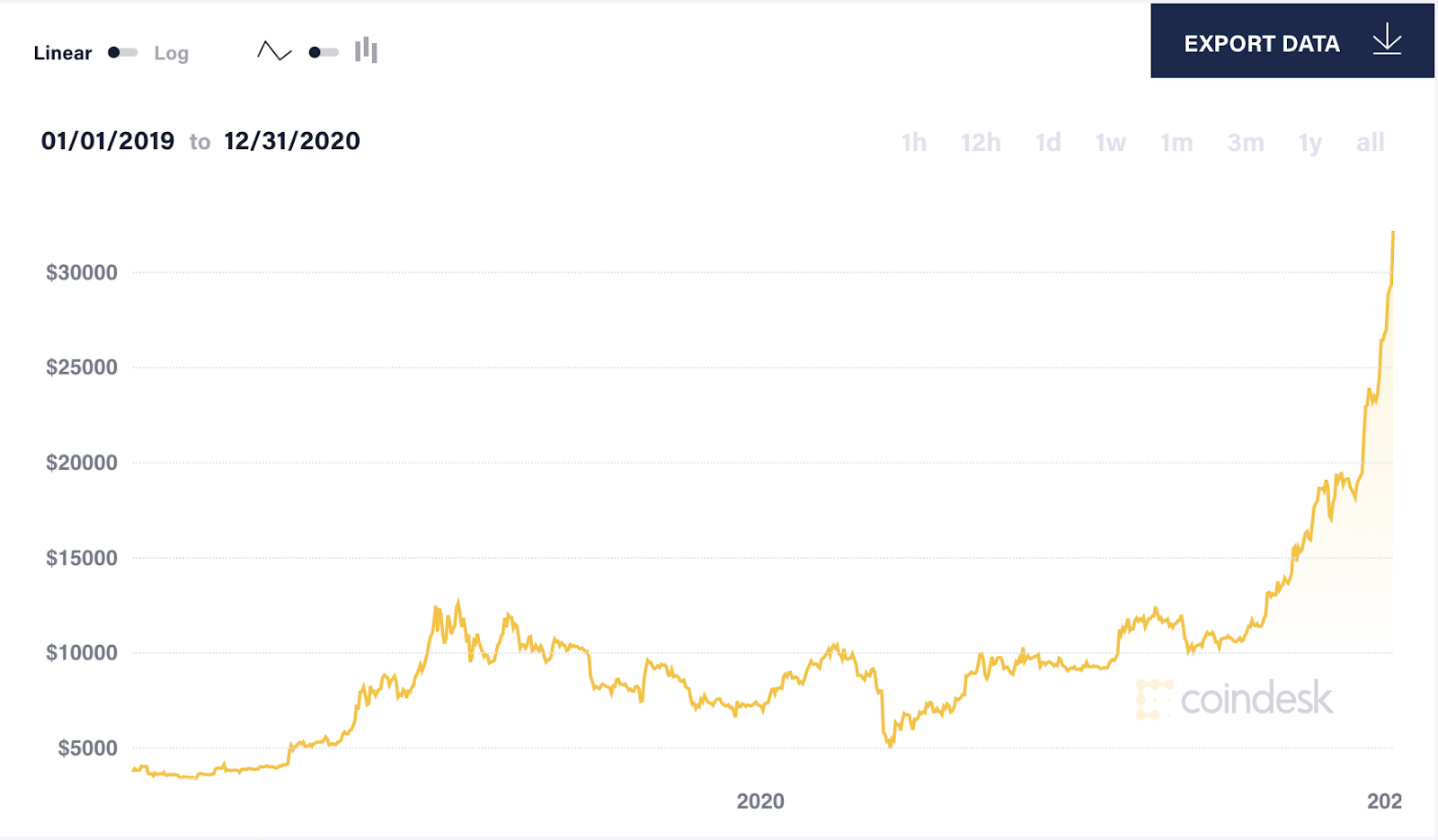 At the beginning of 2021, Dia and I decided we were finally in a position to take a little more risk. When BTC dropped 25% from $40K to $30K in the middle of January I saw an opportunity to enter and researched how to buy Bitcoin.

It took me a month to decide on an acquisition plan. In that time, the price surged to ~$50,000 per coin because of one main thing: an endorsement from Elon Musk.

At the end of January 2021, Elon added #Bitcoin to his Twitter profile. That move alone caused a 20% spike. About 2 weeks later, Tesla announced they converted $1.5B of their cash position to Bitcoin and would soon start accepting the cryptocurrency as payment for their vehicles. This caused yet another spike.

I wasted a few weeks trying to save $3 on fees and missed out on massive gains.

?How I Buy Bitcoin

I’m using an exchange called Coinbase. The reason why I use Coinbase instead of a popular alternative, like Robinhood, is because Coinbase allows you to buy the cryptocurrency itself, not an IOU that tracks it.

Coinbase also offers a recurring investment feature. I didn’t want to get bogged down by deciding when to buy and how much. Instead, I set up a recurring weekly buy.

Buyer beware: the fees are kind of high.

If the total transaction amount is more than $200, the fee is 1.49%. The fees are higher if you decide to use a debit or credit card for the transaction. The fees are lowest when connecting your checking account and doing an ACH transfer.

*Please don’t use a credit card (debt) to buy Crypto*.

I also wanted to be able to take my Bitcoin off-platform and store it in a hardware wallet. It’s like taking cash out of your checking account and storing it in your leather wallet. A platform like Robinhood does NOT allow you to do this.

I haven’t transferred my Bitcoin off of Coinbase yet, but I will be using the Ledger Nano X to do so. This video by Vanader Growth explains the storage process in detail.

The reason why I want to periodically take my Bitcoin off the Coinbase exchange is because of the Mt. Gox scandal.

Mt. Gox, which launched in 2010, was a Bitcoin exchange based in Tokyo, Japan. By the end of 2013, the Mt. Gox platform was handling over 70% of Bitcoin transactions worldwide.

In February 2014, Mt. Gox closed down its website and filed for bankruptcy. Roughly 850,000 Bitcoin, went missing. 200,000 bitcoins have since been recovered, but the rest were essentially stolen.

Although Coinbase is FDIC insured up to $250,000 for U.S. Citizens, it’s still a wild wild west out there and hackers are targeting nascent cryptocurrency holders.

I don’t imagine Coinbase pulling a Mt. Gox, but I can imagine the platform being compromised.

I’ve been paying attention to Bitcoin since 2017. However, we weren’t in the position to buy such a risky asset before this year.

I do NOT believe Bitcoin will be the preferred method of exchange when Cryptocurrency becomes ubiquitous. I.e. You probably won’t use Bitcoin to buy a coffee. You may use it to buy a house or car, however. I also see Bitcoin being the standard against which all other future and existing cryptocurrencies are measured.

Although they are not related in any way shape or form, I believe Bitcoin can reach the market capitalization of Gold.

I’m not trying to time the market. I set up a recurring weekly buy and the only other thing I have to do is periodically transfer my cryptocurrency to a hardware wallet to protect myself from a Coinbase exchange breach.

I don’t know so much more about Cryptocurrency and Blockchain technology than what I do know, but that’s not stopping me from participating.

Hi Sunny, this was exactly the type of info that I needed in order for me to invest in Crypto. You basically laid out the entire plan, greatly appreciate the wealth of information you share, thanks man!