If I had a dollar for every new business idea I ever came up with I would land somewhere between Bezos and Buffet on the Forbes list.

However, if I had a dollar for every business idea I took action on, I’d barely be able to buy a latte from Starbucks.

Nonetheless, coming up with new business ideas is one of my favorite things to do.

That signals to Dia a pitch is about to start. I make my pitch. Dia asks a few obligatory questions like what are your sales and what’s your background.

I make up some numbers and an intricate sob story. Then she inevitably agrees to invest one zillion dollars for one percent of my fictitious company.

Then we come back to reality. Where the truth is there’s no such thing as a good idea!

No idea performs exactly the way you expect it to once you bring it to reality. The handful of businesses I’ve managed to start confirm this sentiment.

I might even go as far as saying every idea is a bad idea until proven otherwise. The only way to figure out if an idea has legs is to just start working on it, which is easier said than done.

Ideas are fragile creatures. We like to keep them safe and warm inside our heads. Saying them out loud is scary enough. Putting them into action can be paralyzing.

We tell ourselves all types of lies to protect our ideas.

With all that said, let me dive in with both feet and share with you an idea that’s probably bad, but might have the potential to be good if I could just manage to start working on it and see it through.

My name is Sunny Shakhawala and I’m a real estate investor from Northeast NJ. I’m seeking one zillion dollars for a one percent equity stake in my company called REIL, which is short for Real Estate Investment Loans.

Sharks, did you know trying to get conventional financing from a traditional lender on a fix and flip project or rental property is damn near impossible? Trust me, I’ve tried!

Fannie Mae and Freddie Mac recently instituted stricter underwriting criteria on second homes and investment properties making it harder than ever before for your everyday American to make it big through real estate investing.

With the United States Government backing fewer loans on non-primary residences, traditional banks are either hiking their rates or simply refusing to make investor-friendly loans at all.

That’s where REIL comes in!

We’re an online marketplace that connects real estate investors with lenders that don’t rely on Fannie and Freddie to originate a loan.

So which one of you wants to invest in REIL and ultimately become the friendliest (and wealthiest) loan shark in the sea?

?What Triggered The Idea

I recently listened to a podcast with Dr. Martine Rothblatt, and one of her favorite quotes resonated well.

The quote is, “Identify the corridors of indifference and run like hell down them.”

In business terms, this means identifying a market that is being ignored or underserved.

In this case, the market being ignored is non-W-2 income earning real estate investors looking for a loan to either acquire or refinance investment property.

A popular concept that demonstrates the “corridors of indifference” is the Blue Ocean Strategy.

When I was looking for my first loan, I kept hitting roadblocks and I didn’t understand why until an underwriter spelled it out for me.

As it turns out, there are many people in my position facing the same issue.

?Scratching My Own Itch:

Some of the best businesses are built by founders who are scratching their own itch. They have an annoying problem and can’t help but build a solution.

This is how Richard Branson started Virgin Atlantic back in 1984. His flight from Puerto Rico to the Virgin Islands got canceled (again) so he hired a private plane and sold tickets at the gate for $40 per seat. He filled the flight almost immediately and went on to create the 2nd largest carrier in the UK.

The reason why scratching your own itch is so important is that building a business is incredibly difficult. The flame for an idea burns out quickly when it comes to doing something.

Suffering from the problem you’re trying to solve is a great way to ensure stick-to-itiveness.

The total amount of money you can make selling what you’re selling is called the total addressable market.

TAM is expressed as a formula:

Finding out TAM is critical because there are only 24 hours in a day. It will likely take the same amount of time to build a business with a $1M TAM or a $1B TAM. I prefer the $1B TAM. There’s more room for error and way more room for success.

Let’s find the TAM for a lending marketplace specifically for real estate investors.

I used the Business Formation Statistics page on Census.Gov to find the answer.

Here’s the data I pulled: 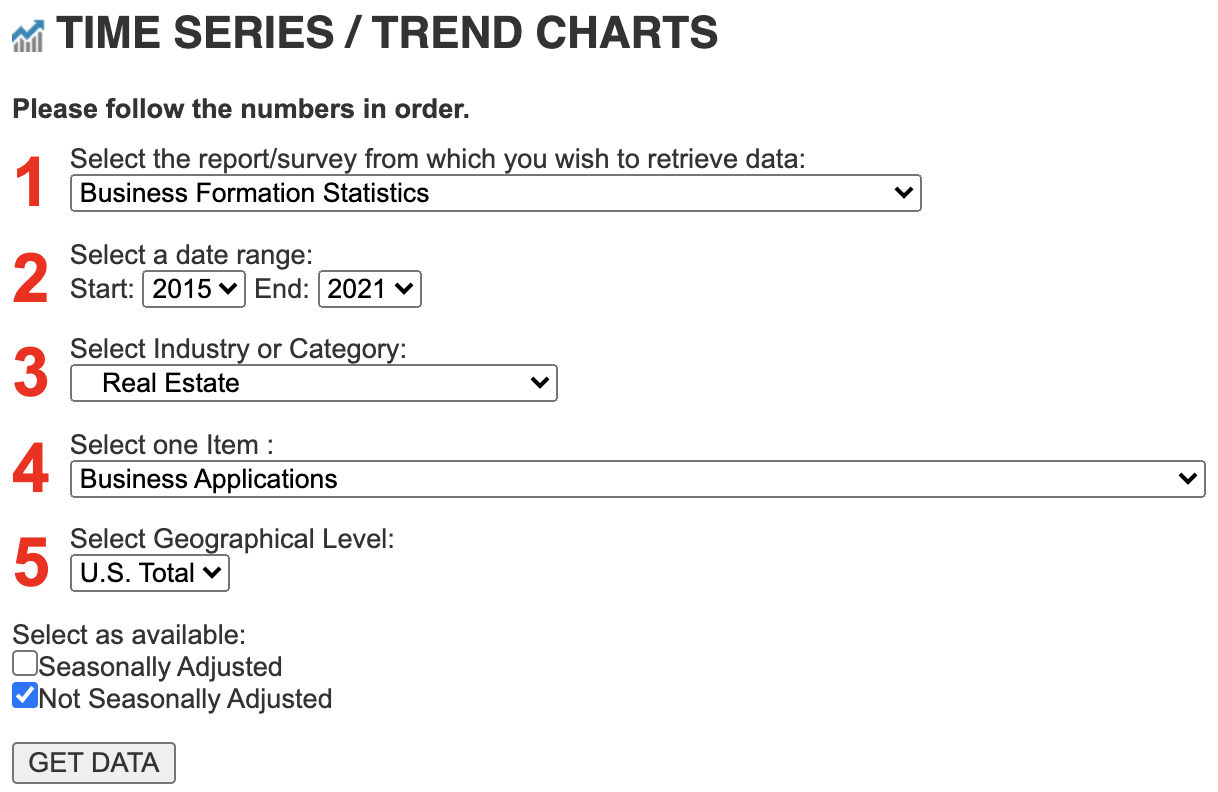 Here are the results:

Here’s the average # of Business Applications in the Real Estate Industry per month over 4 different periods:

2020 was understandably low because of the pandemic. The trailing 3 months is likely inflated because of how hot the real estate market is.

$ of product or service?

So how much money can I make off each user? This data is readily available. Many lenders in this space publish their referral fees directly on their websites.

Here’s how much the lender I used to acquire my first property pays out as a referral fee: 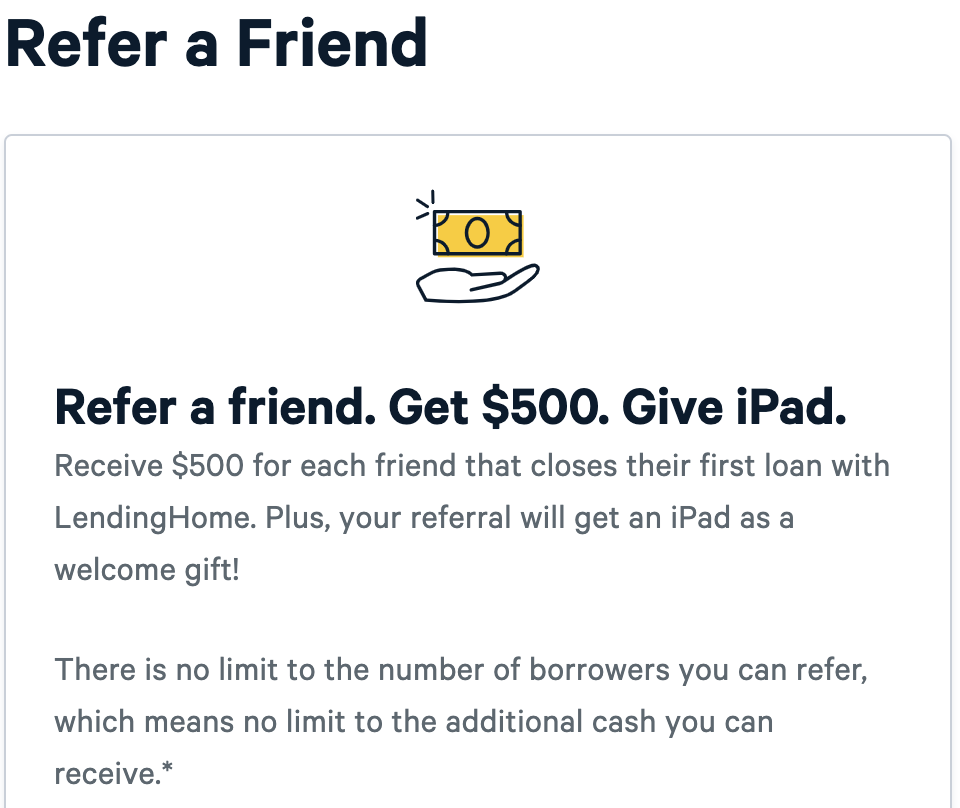 This is worth pursuing.

There are MANY lending marketplaces for a borrower that qualifies for conventional financing on a primary residence:

Here’s a look at the home page from two of these sites:

Aside from the branding, can you tell the difference? Neither can I.

These two competitors have identical homepages. They offer the same services and I’m sure they are running on a similar back-end.

So how does one company stand out among the others? Simple: it’s a race to the bottom. These market-places are competing in a red ocean. There’s a lot of blood in the water.

I want to build a similar platform, but I want to serve a completely different market, where the ocean is still blue.

There’s absolutely no reason for me to reinvent the wheel here. The marketplaces mentioned above have an existing model that works.

The plan is to start as a referral network like BankRate.com and then ultimately become a platform that connects borrowers and lenders through a rate card.

First, you plug in your personal and property level details. Then BankRate presents you with a Rate Table, which includes a handful of different options with varying rates and upfront costs. 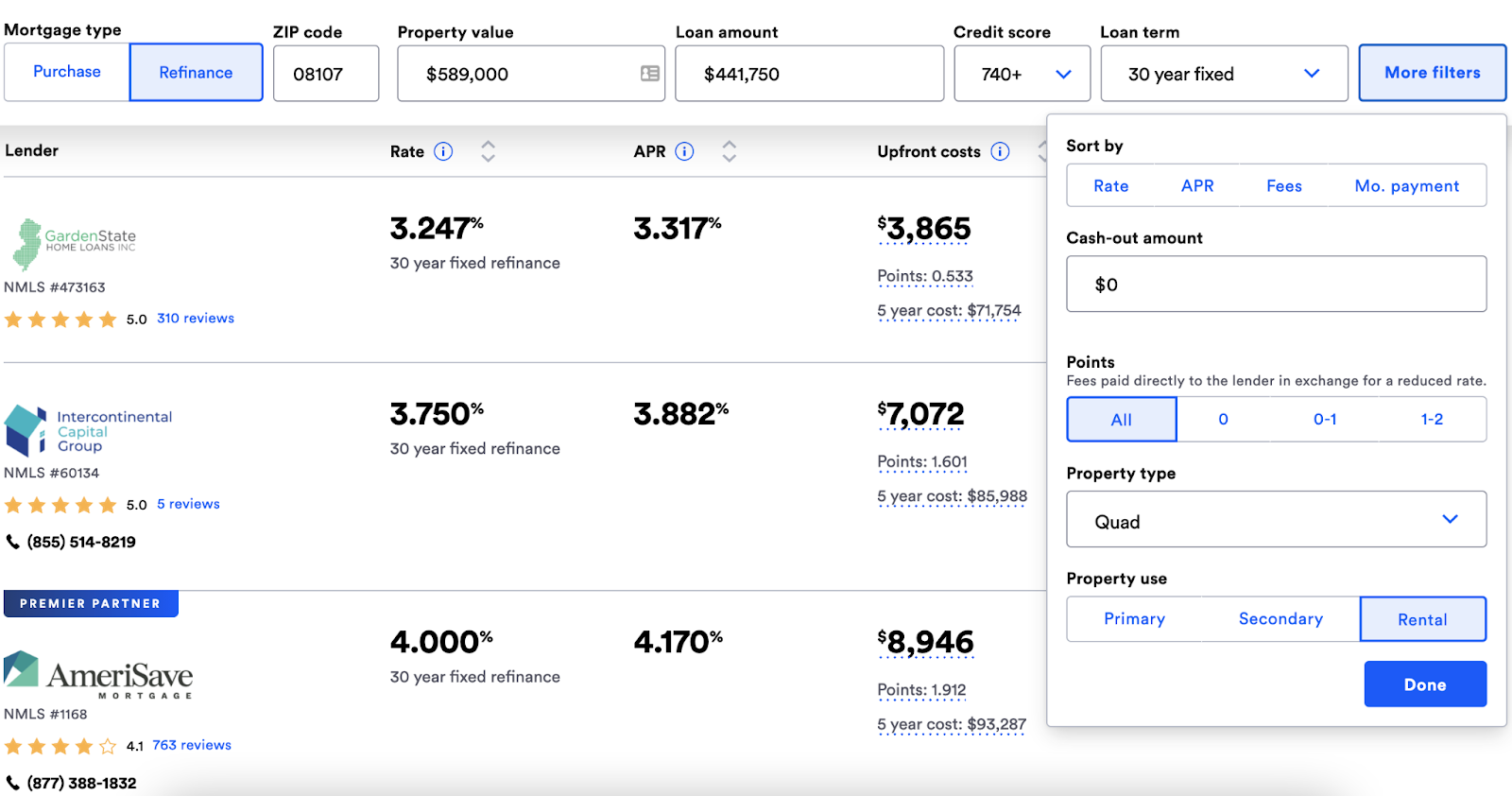 The “gotcha” is in the fine print. Each of these recommendations is just an “advertised rate”. So while they are taking down property-specific information, there’s no guarantee you’ll be able to secure these rates.

If we get traction with the BankRate.com model, the next step would be to transition to the Rate Card Platform model.

The best way I know how to explain this model is by using an example from the hospitality industry.

Expedia, for example, started as a referral network, like BankRate, and eventually transitioned to a rate card platform.

Here’s how it works:

A hotel can sign up for EPC and upload their room types and rates associated with different scenarios. Almost every hotel that takes online reservations uses this platform.

The rate card model allows you to have base rates and then incremental adjustments. It might look like this for a random hotel in the suburbs of NJ:

The rate card model allows the provider to create rules that dictate the final terms to the consumer. Expedia manages the data and connects the two parties.

What you may not know about Expedia is that they are a behemoth in the hospitality space, and it all stems from the EPC platform.

On the business side, EPC has 1M+ hotel/motel properties and 1.8M+ vacation rentals on its platform.

So while all these referral networks are trying to make a few cents off clicks and a few dollars off referrals, a Rate Card Platform like Expedia Partner Central essentially controls the market because it’s the engine behind most of the websites you use to book travel.

So the play for REIL would be to create a rate card platform that allows lenders to upload their rates and adjustments and then publish that through the BankRates, LendingTrees, and Credibles of the world.

??Middlemen Capture The Most Value

I’m going to end this with a story.

On January 24, 1848, James W. Marshall struck gold at Sutter's Mill in Coloma, California. The news didn’t travel fast back then, so it wasn’t until 1849 that roughly 300,000 people made their way west to California.

This movement is better known as the California Gold Rush. It’s also the naming convention for the NFL’s San Francisco 49ers.

I’m not sure if this part of the story is true or not, but the tale goes like this: the people who made the most money in the gold rush were the ones selling shovels and pick-axes. There wasn’t much gold found after all.

This story plays out again and again. Even more so today and on a much larger scale. It’s the middlemen that capture most of the value.

I doubt REIL is going to be the next Uber or Facebook, but it can be something. Connecting real estate investors and lenders willing to work with them has a lot of upside because no one else is doing it and very little downside because it’s already being done for a different type of borrower.