Ever since @realDonaldTrump’s account was permanently suspended, I think it’s safe to say there’s a new king of the hill on Twitter, and his handle is @ElonMusk.

You may know Elon for one of many things:

But did you know his Twitter account is infamous for being a public (& now decentralized) market mover?

Back in 2018, Musk got into hot water for tweeting his intention to take Tesla private at $420 per share. He went as far as saying the funding was secured, which temporarily bolstered the stock price.

The SEC slapped Elon & Tesla with a $20M fine... each for stock price manipulation. Ouch!

More recently, Musk has garnered attention for his participation in the crypto space.

On February 8th, 2021 Musk announced Tesla purchased 1.5Bn worth of BTC. Tesla concurrently announced their plans to accept BTC as payment for their vehicles.

On February 7th, the price of BTC was hovering around $37K. By February 9th, the daily average was closer to $46K. A 25% increase.

The price of BTC increased ~66% in Q1 21. It was prudent for Tesla to take some chips off the table after Musk did an incredible job pumping not only BTC, but almost the entire crypto-market through various tweets.

Then the honeymoon phase ended and trouble in paradise began.

He went on to voice his concerns about the use of fossil fuels for BTC mining and how it goes against his effort to conserve our environment.

The next day, Elon tweeted, “To be clear, I strongly believe in crypto, but it can’t drive a massive increase in fossil fuel use, especially coal.”

Musk’s support was too little too late. BTC was too far down a slippery slope.

Then Elon’s Twitter feed shifts to business as usual. Over the week, he tweets about SpaceX, Giga Berlin, and the next generation Model Y. 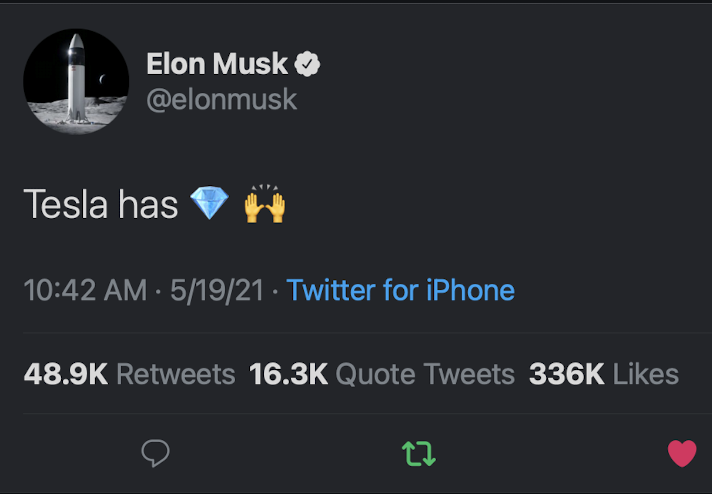 For anyone unfamiliar with the lingo, the emoji combination of

translates to “diamond hands”, which means he’s holding his position.

❓What Does All of This Mean?

Is it actually possible for one man to control the price of an entire asset class in fleeting, emoji-filled monologues of 280 characters or less?

Well yes and no.

Based on recent events, it’s clear the crypto market hangs on Musk’s tweets.

However, there’s a bigger story here regarding the recent sell-off. Here are 3 contributing factors in no particular order:

On Monday, May 17th, new crypto investors learned that the IRS treats cryptocurrency as property, not currency, and taxes it as such.

The IRS Is Coming for Crypto Investors Who Haven’t Paid Their Taxes.

On Tuesday, May 18th, the People’s Bank of China reminded financial institutions that they cannot conduct business with cryptocurrencies following China’s 2017 ban of bitcoin exchanges.

China is the world’s second-largest economy. This timely reminder didn’t sit well with the investors who realize if you remove 15% of the world from participating, it’s not a good sign for that asset class.

Finally, the “whales” are taking some chips off the table. 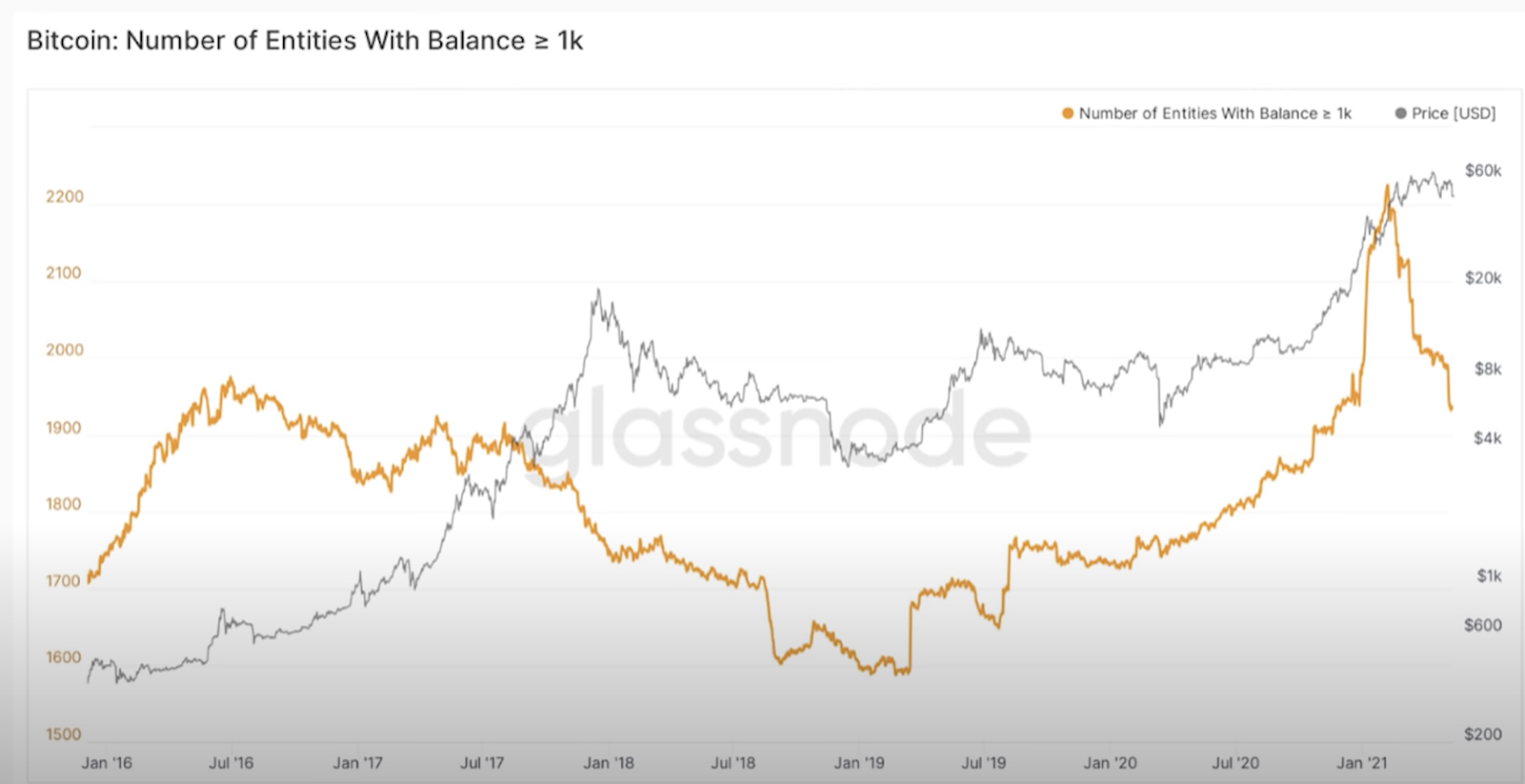 According to Glassnode, wallets holding more than 1,000 BTC have been selling off since a little before the $60K peak in Q1. Most of these wallets came on-chain back in 2017 when BTC was trading at ~$650.

Can’t blame them. I’d probably sell once I reached 100x return too.

Elon blamed the rapidly increasing use of fossil fuels, especially coal, in the BTC mining process as the reason behind not accepting BTC as payment for Tesla vehicles.

As the CEO of a fully electric vehicle manufacturer, this reasoning is on-brand and passes the sniff test.

But does he really expect us to believe he just had this epiphany? The man taught himself rocket science and launched a car into outer space.

There is a 0% chance he JUST now finds out about the negative environmental impacts of the BTC mining process.

By the way, is that narrative still true?

So what’s his angle? My best guess is another line of business.

The best entrepreneur can sell you the solution to a problem you didn’t even know you had.

Now that Elon announced his energy consumption concerns with Bitcoin (problem), he has a golden opportunity to present us with a clean-energy solution.

Tesla is in a position to provide mining hardware to the masses.

This pushes Tesla’s brand further and benefits Bitcoin as well. Let’s not forget BTC is still on Tesla’s balance sheet to the tune of $1Bn+.

If you Google Search “Tesla Powerwall” it will say, “Powerwall is a home battery designed to store energy from solar or the grid, so you can use it anytime you want—at night or during an outage.”

Guess what happens to be a great use of stored energy? You got it, mining bitcoin. The “how” is lost on me, but I wouldn’t put it past the guy who made reusable rockets a thing.

?How I’m Dealing With The Volatility

Disclaimer: This is not investment advice

I started dollar-cost averaging my way into BTC & ETH back in Q1 of 21.

Dollar-cost averaging (DCA) is an investment strategy in which an investor divides up the total amount to be invested across periodic purchases of a target asset in an effort to reduce the impact of volatility on the overall purchase. The purchases occur regardless of the asset's price and at regular intervals.

I’ve been buying both currencies automatically on a weekly basis for a few months now.

I liken my investing strategy to grocery shopping. Every time we go shopping, we buy the same amount of the same stuff.

But when something (non-perishable) goes on a deep discount, we might buy 2 or 3x the amount we usually buy.

This past week, we all had the opportunity to apply that strategy to our crypto investments as well. This strategy is referred to as “buying the dip”.

Unless the information changes. Then you should definitely reassess your strategy.

The threat of an 80% tax on crypto-currency gains is scary. If (or when) that becomes real, I might stop buying altogether.

The idea of one man’s tweet moving the market double-digits in either direction is even scarier. At least for now, he’s an advocate of crypto and claims he has

Participating in the crypto market is a roller-coaster ride. I can’t say I recommend it, but if you have to get in, get ready for a bumpy ride.